Today is my stop on the blog tour for Spaghetti Head, please check out the other stops on the tour and everyone offers different content. 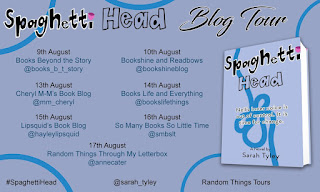 BLURB: Journalist Nell Greene is intelligent, beautiful and quirky – but a failure at relationships, thanks to her untrusting and disruptive inner voice. She has received The Award, and refusing to help repopulate the earth can seriously complicate your life: it is time for Nell to change. In a world where greed, war, and an environmental disaster have massively reduced the population, survivors have introduced a new system of governance - led by women but delivered by robots, and designed to promote peace and remove opportunities for abuse of power. Or at least that was the intention… Will Nell overcome the challenges of life in a post-apocalyptic world to find happiness, or will the System win? Spaghetti Head is Sarah Tyley's debut novel that addresses issues of modern womanhood, environmental devastation and the impact of technological advances on our freedom, relationships and mental health.


Learning to manage, control and direct the resources of your mind
is the greatest challenge you will ever face.

“How many times, Alice, have I showered out here, hoping for a blinding flash of enlightenment?”
“Lots.”
“Maybe I’m not breathing deeply enough,” I said, staring at the candle resting on her back.
“Well you’d better hurry it – you’re four minutes over your water allowance.”
I closed the tap and held my arms out to the side – no need for a towel in this heat.
“What do you want enlightenment about, anyway, Nell?” Alice said, her black metallic nose shining up at me in the moonlight.
“About why I’m still a single. About why I can’t tell Mum and Dad I love them. About whether I should listen to my head, or my heart.”
Always listen to me, Nell – here in your head.
“SID’s telling me to listen to him.”
“Well, SID would! Listen to your heart, Nell – it’s where you’ll find the truth. Whatever you do, do not listen to SID – how has he ever helped you? He’s probably the entire reason you still are a single.”
“You think so?”
“Well what other reason is there?”
You’re terrified of commitment?
“Talking of being a single, I’d better get dressed, I’m meeting Youssan in an hour.” I crouched down to blow out the candle and tickle Alice’s ear. “Do you think it’s a good idea?”
“What?”
“Meeting Youssan for dinner.”
No.
“Absolutely.”
She hasn’t even met the man!
“But I was only chatting to him for a couple of hours last night – what if he only invited me because he’d been drinking?”
Strong possibility.
“Well, there’s only one way to find out, Nell. It’s only dinner, for goodness sake. Lighten up!” 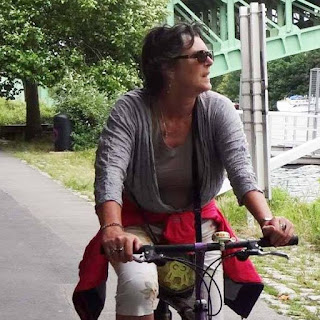 ABOUT THE AUTHOR: I grew up on a dairy farm in Somerset and had a lovely childhood running around outside, spending alot of time surrounded by cows. I would have to be biased towards Friesians, but really any cow will do - I love them all.

I have written a diary since I was twelve, and some years ago I thought to myself ‘hey, that must mean I’m a writer’ – and so I embarked on short stories. I never quite got the hang of those so moved on to trying a novel.

I currently live in France splitting my time between my gardening business, writing, and playing tennis. I love Roger Federer almost as much as I love cows