My second day at the Edinburgh Book Festival

Just to be clear, this isn't day two of the festival, I just haven't been able to go every day, my second day (Thursday 16th) is actually day 6 of the festival. So lets start with the journey there, it was chucking down I tried to take a photo, it sucked lol, potentially my worst picture ever. 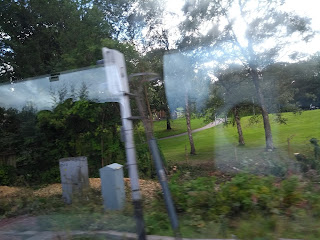 I went to three shows, the first was Nick Harkaway and William Sutcliffe - not normally books I would go for to be honest but I wanted to go to things that aren't normally what I pull to. "We See Everything" by William Sutcliffe released in 2017, Drones initially for helping now more weaponised, has a duo narrative the watcher and the watchee. Gnomon by Nick Harkaway released also in 2017, a detective goes into a murdered persons memories to help solve the crime and finds four intact identities. Both have moral dilemmas, alternate universes well where the world is controlled by systems, both in different ways. 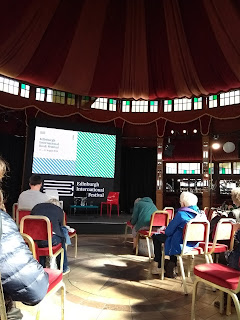 It was in the Spiegeltent, first time I have been in there, it is stunning. The ceiling is like velvet and both a lovely material and colour. 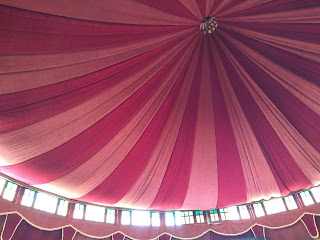 It has side seats as well as the rows I was sitting in and if that isn't enough for you, it has a bar!!

Both the authors talked about what the journey creating the books was, research they had came across and to be honest some of it was pretty eye opening and a wee bit scary. I would absolutely not have gave their books a second glance as the topic isn't something that would grab me, however after listening to them I am more inclined to buy and try (despite Gnomon being 750 odd pages). 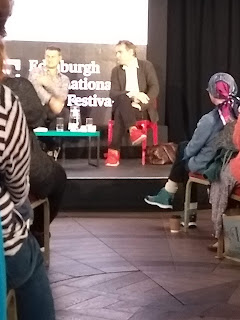 Next up was Alexander McCall Smith, yes again, I enjoyed his chat the first time I wanted to go and see him again. 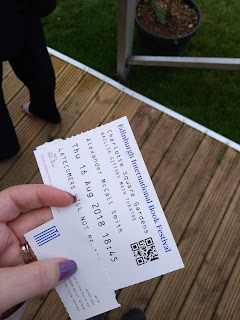 I was in the wrong queue and almost late for the event, I was so involved in reading my book I just went into the biggest queue without checking, disaster avoided though I got sorted in time. 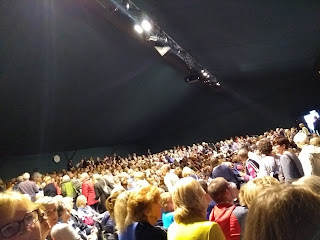 The hall was mobed again and it really isn't surprising, he is such a wee love and his laugh/chuckle, if you could bottle and sell it I would be minted and everyone would be happy. 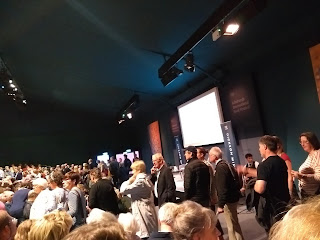 We had the boys playing music as the hall was filling and again mid way through, lovely! 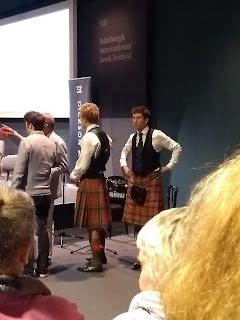 So, some of the topics had been covered in the first nights chat and some was new. This event was chaired by Jamie Jauncey and they discussed the beginning of Sandy's books. Now sold 30 million, translated into 48 languages, he discussed starting out - how he created the book cover himself on Photoshop and giving out the original books to friends (not family), he pointed out whilst editors and he missed typos..............those reviewers didn't lol. Talking of reviews, he said Walter Scott reviewed his own book which Sandy thought was terribly efficient. He is such a wee chop and even when poking fun he is so nice. 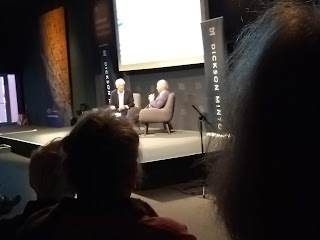 Last but not least was Val McDermid chaired by Liam McIlvanney, Val has 32 novels translated to 41 languages, she has sold 50 million copies, wow!. 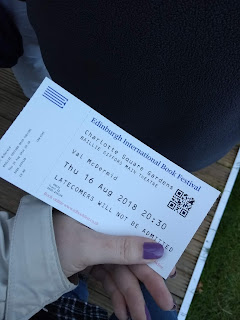 Can I just say I LOVED that Liam said, before starting, to please TURN OFF YOUR PHONE OR TURN IT ONTO SILENT. Now this may not seem like a big deal, however, this was my 6th event this week and every single one a phone has went off, minimally once. I just find this incredibly rude, it takes two seconds to turn off your phone, you are seeing an author, it is silent barring them speaking. So please, for the love of all and my twitchy eyeball, PLEASE turn off your mobiles. 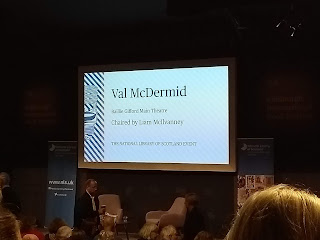 Val discussed plotting creativity, how she used to use index cards, different colours and that system worked great for her, until it didn't. Invariably it stopped half way through a book and she had to find another way of working. That saw her head off to Italy, not in the runaway way Agatha Christie did (Val's family knew where she was) but she had no wifi, no internet, no phone and managed to bang out 65,000 in 9 days. 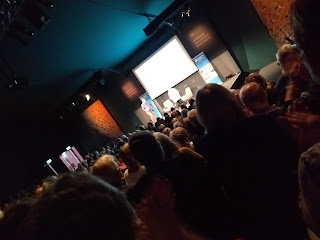 To a packed room she discussed her new novel which whilst not out to buy until next week, those at the festival could purchase it there, a whole week early. Val said she can overhear a comment, something in the news and files it away. Eventually something emerges, it can develop in her head for years before it is ready to be written. She said "Like a giant compost heap different things rotting away and hopefully something will be left over." 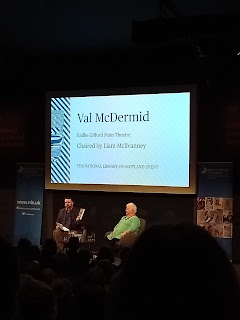 Val chatted about the beauty of fiction, you can write about a place people recognise and readers will go with it but also relatable for those who don't know it but can identify it to X location. You have to know where it is credible to put say a fake nightclub as you aren't going to use a real location where drug deals are going down. She also discussed the band The Fun Lovin Crime Writers and how Chris Brookmyre got himself in the band. Also you know you are a "rockstar" when you are recognised by a "fan" shouting on you, whilst they are urinating in the street singing "only one Val McDermid." There was a lot of banter, Val is so funny, easy to listen to and I could have listened to her all night.


Val has a fair few things named after her, a football stand, a mortuary and under grad bar! Liam was a good interviewer and what I really loved was small touches, for example he filled her glass of water before his own. Small touch but what a gentleman. They discussed genre snobbery, Val breaking discussing vernacular and using what she grew up with and knows. They opened it up to the floor and with starting a little late they let it run on to make up the time. 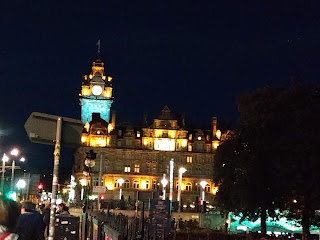 How lovely is Edinburgh! 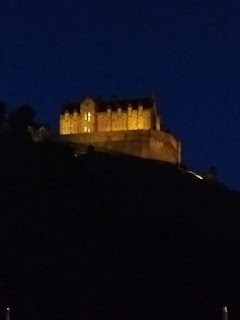 Oh and I forgot to share the piccy of the wee ducks that are outside the press pod! How cute, eh? So that is my first week at Edinburgh Book Festival. I have came away with new books, food for thought and very much looking forward to next week!