Author events - my first day at the book festival 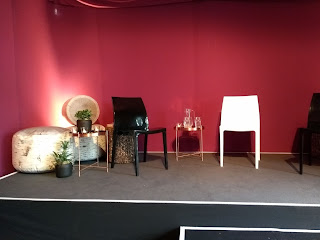 So yesterday saw me going to my first ever book festival, if you have considered going but held back as you don't know what to expect, cost etc and haven't already, check out my post covering it. Todays post is about the three events I went to see. 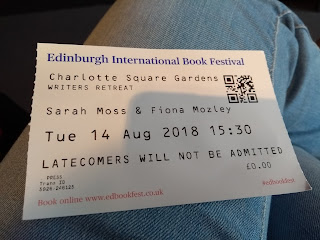 First up was Sarah Moss & Fiona Mozley. Fiona's debut novel is "Elmet" it took her three years to write the book, her PHD is currently on hold and she works in a book store. Sarah is Glasgow born, has a few books under her belt, currently teaches and is considering her next book which may be non fiction. Both books use teenage protagonsists, Fiona's characters claimed land and see nothing wrong with using it to live on, one father and two children, personal limits and family loyalty. Elmet was described as Hansel and Gretel meets the Godfather, now if that isn't an inviting description I don't know what is. Sarah's her lead male is obsessed with the iron age, he is a cruel and vicious man who loves his wife. Sarah also didn't want to write a book that had objectification/titillation however shows a monster of a man who is capable of love whilst having horrendous and violent tendancies toward his wife, we see it through the daughters eyes I believe. I think the main thing I certainly felt I picked up was that we have so much violence and it is easy to have a serial, cold callous evil but what is more scary is one who is very much capable of love AND so much violence. I haven't read any of these but I do intend on checking them out, both authors are new to me. 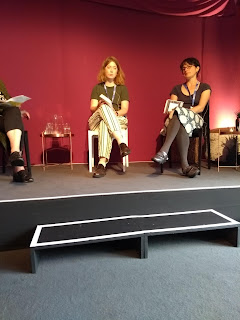 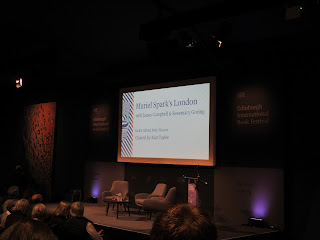 Up next was Muriel Spark's London. James Campbell and Rosemary Goring, chaired by Alan Taylor. I hadn't heard of any of these people, nor Muriel Sparks but I liked the description and wanted to check this event out. The trio worked well together, jovial, informative and some unoffensive jibes at both Glasgow and Edinburgh. The event was held in the Baillie Gillford Main theatre, comfy seats, large capacity and roving mics for when it was opened out to the audience. Despite Spark's writing various locations the stories are more about the telling than the setting. 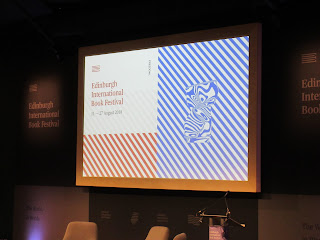 I can't believe I hadn't heard of her before. They spoke of things she did, some of her well known stories, her autobiography and I will be buying a few myself. I think particularly those set during the war, I am enjoying reading about those types of stories at the minute. Alan Taylor reading did have some great banter and I think I would absolutely sit in another event chaired by him, all three speakers actually were very good. 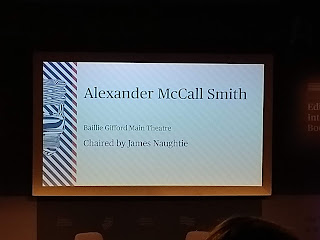 My third event of the day was also in the Baillie Gifford Main Theatre but so popular the queue went around the whole circle of the venue! Author Alexander McCall Smith, author of many novels and I actually have heard of him, I have one of his books on my tbrm but haven't read him yet. Affectionately called Sandy, the event was chaired by James Naughtie and both these gents were hillarious. If who he is as a person is channelled into his writing, I can totally understand why he has so many books and fans, I could have listened to both of them chat all evening. 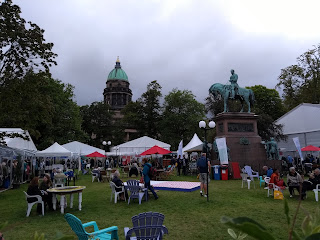 The focus of the event was supposed to be on the new book "A Gathering" - title chosen by the publisher, McCall jokingly said he is happy to take the credit. The book is poems from many of his favourites and he did a reading of one, as did James and another gentleman from the states, invited by Alexander himself up to the stage however I failed to catch his name, my bad, he did chat about the new book but gave us some chat on current work and opened it up to questions from the audience. He has a huge love for Scotland and at one point said "It does break the heart" that sounds negative but it was meant in a beautiful way. You can understand why the place was packed 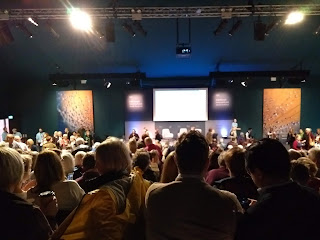 He has a new series coming out, scandi crime I believe it is called and it sounds absolutely hillarious. The lead character, a detective has a dog that is deaf so lip reads but only in Swedish. Both the detective and the dog are in therapy at one point and he had such fun writing it he penned it in two months. We also got a reading of a chapter he had written that morning, exclusive if you please! Soft spoken, very humble, pleasant and just seems like such a good guy, I will be digging my book out to read soon and waiting for this new series as it sounds brilliant. I will also check out the other series he has written, not like I need new authors to read but after listening to him I absolutely HAVE to read him! He is also on another night, the 23rd of August I believe, check online and if you only see one show I absolutely recommend him guys, bloody marvelous!


And just to finish off, I came home with an I <3 Edinburgh totebag, there was a wee Scotsman stall selling newspapers with a goody bag just outside the entrance to the festival. Sometimes you just HAVE to be a tourist in your own country, miss paws seems impressed by yet another totebag, lmao. If you are going to anything please let me know, if I am there on that day I would love to meet up! 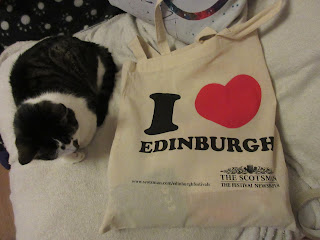