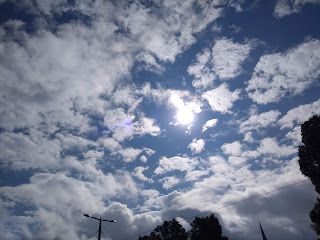 I need to talk about the thing that is Scottish weather, so the report said wind and rain so I had my jumper, double lined jacket and sure enough on route to the station I got rained on. I got off the train to the sun splitting the skies, 20 degrees, so I nipped into the shop and bought sun glasses. Two minutes out and it started pelting again, we played the weather game for about thirty minutes, I was a riot by the time I got to the festival. 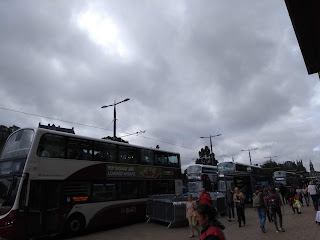 So, I went to three events, the first up was Ian Rankin and John Harvey. It was Ian really interviewing John which is absolutely grand I just thought it was be back and forth. I hadn't realised John was 79 (I don't always check out personal details about my authors I generally just read a book, like and get more of them) nor of his health issues. 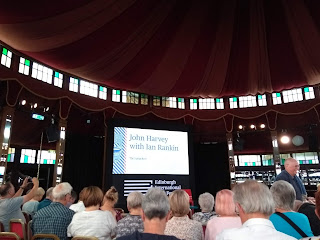 Before we started Ian asked folks to make sure their phones where off, a guy in the audience shouted out "PUT YOUR PHONE DOWN" when Ian had started talking to John. Ian was taken aback, as was most of us and asked what? The guy said someone in the front had their phone up and they couldn't see, Ian was like well I did think I am only holding my glasses not a phone, Awkward with a capital A but then we were off. Mid interview the police sirens went off, Ian said he liked to think it was the local police, knowing the crime writers were on having a talk and that was their nod to them. 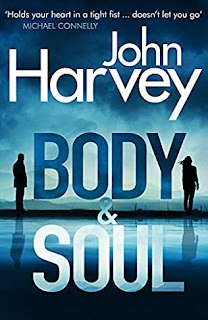 John talked about his Resnick novels, he was stopping at ten, had a farewell party and then he HAD to write the 11th it was like an itch that needed scratched and then you can finish on 11 books so another came. Body and Soul is the newest book in the Frank Elder stories and will also be the last. When quizzed on this John talked about previous writing, how long it takes, promoting and he is 80 next year, currently dealing with health issues and for him, this is it. He will continue doing short stories and those that are shorter but at this stage he cannot go through the long novels and processes. After writing this I checked out his works on Fantastic Fiction, wow this man has offered us a lot! I will be checking them out. Ian himself was lovely to listen to and acknowledged as he gets older his books are shorter, he also spoke of similarities of his character and Johns Resnick and why he made some changes to Rebus. It flowed well, a very good combo and I am so happy I got to see Harvey. 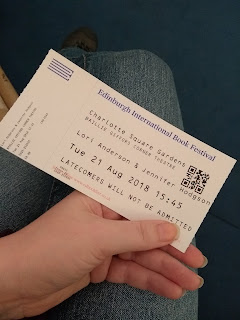 Up next was Lori Anderson and Jennifer Hodgson, chaired by Sheena McDonald. Discussing two British authors who are pretty much forgotten in literature. Half the room put their hand up that they had heard of Lorna Moon, only one for Ann Quinn. Both ladies took time out to give us a reading from each, Jennifer from her book. 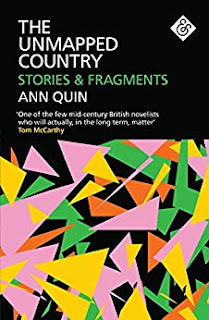 And Lori from "The Collected Lorna Moon" 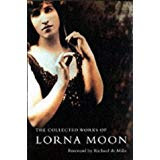 I hadn't heard of either of these ladies at all. What followed was an interesting introduction to these ladies, who they were, the shock of their behaviour especially for the time they were around and how harshly women where judged. Jennifer Hodgson has spent 10 years on Ann Quinn, exploring, travelling the globe and speaking to ex partners and getting her hands on her work which she has now created a book on and we had a reading. The Unmapped Country Stories and fragments - Ann Quinn by Jennifer Hodgson is available to buy now, click here. I loved that both these ladies found a passion for two ladies who they have effectively resurrected, I certainly will be checking out their works. I also LOVED that Jennifer was so excited when someone had her book to buy/sign after the chat, she is actually too cute and I love when anyone gets so excited, immersed and involved in literature like that. Also next year fout of Anne Quinn's books are getting republished, I believe as a result of the interest in Jennifer's book so I will be looking out for them.


And my last event that day was Val McDermid and Philip Howard chaired by Ali Bowden and what was I going to read whilst waiting to goin, why "Trick of the Dark" by Val of course.br /> 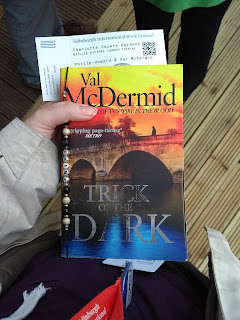 After listening to Lori, Jennifer and Sheena talked about forgotten authors of their time I was primed for this event. Susan Ferrier (hailed as the Jane Austen of her time & the fabulous Muriel Sparks where the subject of the chat. We had two ladies acting out and reading as both Susan and Muriel. This centred around the "Messages From The Skies" where Val and Philip (with many others) brought to life a story with these two writers and projected in 12 buildings in Edinburgh. There as an app you could download and the journey around the city to hear the stories. We got a wee taster of what the New Year's Resurrection had been on Hogmanay and I so wish I had heard of this when it was actually available. 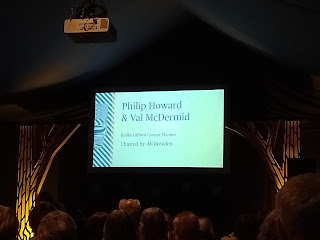 Philip had said he wanted Val but didn't think they would get her with her being so busy and was delighted when she accepted. Val described it as essentially being a feminine rant with murder. Looking at why women had been rubbed out of literature, how things are better now but we still have a long way to go. The interaction with "Susan" and "Muriel" was fabulous, Susan taking a murderous approach and killing off these critics and Muriel pointing out you kill one and five more bloggers pop up. It was great, they gave us some humour about how the locals reacted to some of the prep work (the Arthur Conan Doyle pub becoming the J K Rowling oh my!) and a statue going missing (really it had been moved and wasn't anything to do with the project) and the things they had come up with. An audience member asked if it could be bought as a dvd and Val had said whilst it can't (currently) the footage is all available so maybe that is something they could look at. Also, a similar project could be coming for 2019 so now I am aware I absolutely will be keeping an eye out for that. McDermid is such a talented lady, I could listen to her for hours and she just seems to bounce off whoever is on stage with her, fantastic. It was yet again another full house! A fantastic third day for me, I wish I had better planned and been able to go to every day and had a time turner so I could go to all the shows! 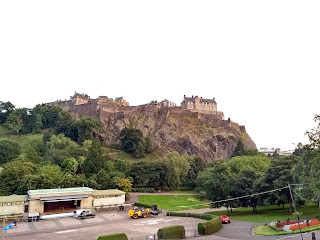 Walking to get my train, I had to stop, doesn't matter how many times you go past, it is breath taking!


And I finally stopped in at the book shop in the festival and bought another Alexander McCall Smith. I read the blurb, soon as I seen the vegetarian dog I was like right this is the book for me, also the first in another series. I cannot wait to try one of his books, even reading the back I could hear his voice in my head just chuckling away. 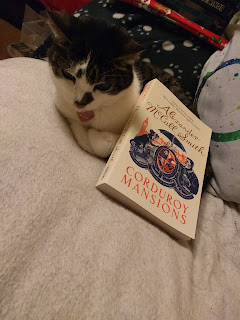