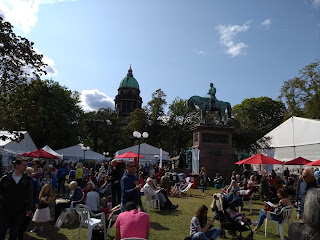 Finally, I got some friends to come to the book festival with me, it was much easier to be fair after I had written about what to expect at the festival and what it is all about.


We only had one show booked and that was to see author John Boyne. After a horrendous train journey where Scotrail had allowed far more on the train than capacity could handle, we got there in once piece. I did message this which thus far has been ignored, I have photographs should they want it, children and adults on every spare bit of the floor, first class opened to accomodate and still far too many! So unsafe and thankfully no one became unwell, you couldn't get out of your seat to go to the toilet much less someones aid! Not happy. 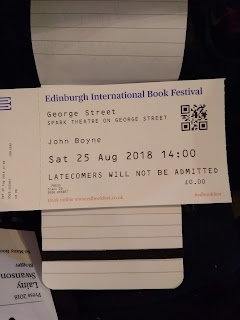 Anyway, back to the event, the weather was bright, Boyne I have read a few times and this is for his new book "A Ladder to the Sky". The event was chaired by Lee Randall, John sold 9 million copies of "The Boy in the Striped Pyjamas" the book most people know him for. Boyne joked about almost not making it, his plane was stopped on the runway as the Pope landed at the same time, he jokingly said he considered getting off and having a word. 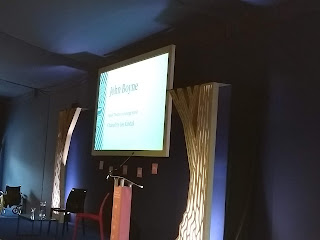 War is a recurring theme in many of his books, "The Heart's Invisible Furies" had a long passage that didn't make the final but other books centre around war or have some kind of reference or passage in it. He comments on how folk can say (in relation to world war two and the Nazi's) "Oh I would never have done that" but it is easy to say that with time and geography on your side. Lots of those who did things in the war, soldiers etc would have been 17-18 years old and most of that age were signing up. He discussed his protagonists and of them says they are never the ultimate good guy or bad guy but somewhere in the middle, in one book something horrific is happening and the main character is complicit in the knowledge and doing nothing about it. 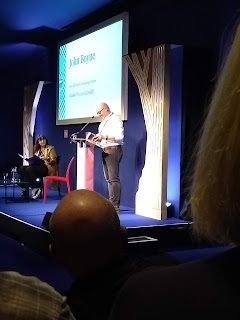 We were treated to a reading from the book and he discussed his writing, reviewing other books and how he passed on a book as he didn't enjoy it and didn't want to write a bad review. A few months later said author contacted him and dug him out for it, there started a campaign of almost hate again him on Twitter and how not only can you get flack for having an opinion but also for not having one (as such). He didn't name any names but sure is that not shocking! 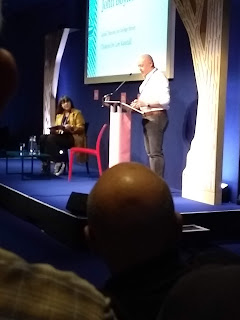 He spoke of authors private lives and how he isn't interested in what they do, the only thing that interests him is the book itself, the personal life of that author is, to him, irrelevant. Some authors write from the head, some from the heart, Boyne states he writes from the heart. Most of his favourite authors are women, he comments on how grand Maeve Binchey is and had she been Maurice she would have had more respect, awards etc. He actually recalled an author (or was it a critic?) who gave a glowing review and when he found out X book was written by a woman he withdrew his previous comments and slated it, is that not just mind blowing! 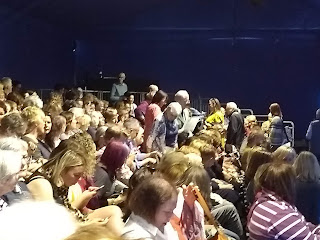 He played to a full house and I am not surprised. When asked how he felt, from a pressure point of view with new books against the boy in the striped pyjamas he said he knows nothing he writes now or later will sell more so there is no pressure. He also doesn't believe that is his best book, he chose his best as "The Absolutist" (I have yet to read that so will comment when I have). On plotting he says he never plots out a book in advance, he just writes a sentence and sees where it goes, fantastic, was lovely listening to him and that accent, well, I could listen all day!


After that me and the group went off to Mary King's Close, I have been before but one of the friends it was their first time. 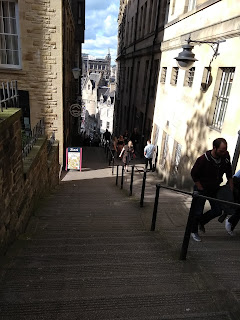 The stairs to get up there almost killed me, my dodgy ankle and my pal who is a smoker! 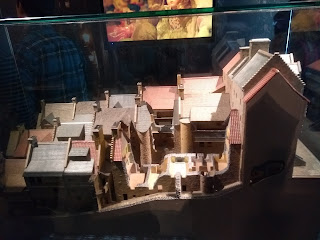 Mary King's Close is a fantastic tour, 1 hour long and at time of posting £15.50, you learn a good bit about Edinburgh's history, a wee bit of banter and see and walk in old standing buildings. You are not allowed to take any photographs once inside the tour but you get a wee photo to buy if you wish and they sell programs also. 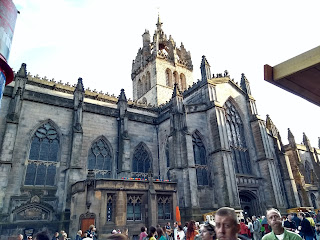 Edinburgh has some pretty amazing history and buildings, you could stoat around for hours to be honest and go back the next day with still loads more. There is almost always something bookish on too and now I am comfortable travelling on the train there I Will certainly be seeking out more! 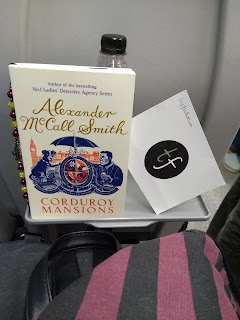 I finished with a wee read of one of the books I bought at the Edinburgh Book Festival, I also seen this author talk twice so heard his voice the whole time I was reading. Review for this book will follow shortly, keep your eyes peeled.