Today is my turn on the blog tour for "11 Missed Calls" by author Elisabeth Carpenter. Today I have an extract of the book for you AND this is my first time ever having an extract on my blog, exciting! 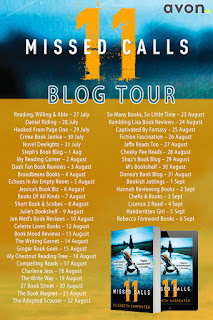 Sheila sniffs and remains on her perch behind the till.

‘I don’t have to go in the back if I don’t want to,’ she says. ‘If she wants to say hello, she’ll have to come in here.’ She leans forward. ‘She could be a murderess for all we know.’ She whispers as quietly as a church bell.

I could argue that Ellen probably isn’t a convicted killer, and that being the veteran volunteer of the bookshop with twelve years’ service, Sheila should make an effort to welcome her, but I don’t. It will fall on deaf ears, as things like this usually do with her – she pretends, at times convenient to her, that she’s hard of hearing.

Instead, I say, ‘How many people do you know that have the same birth date as you?’

It’s like I can hear the index cards sifting in her mind as her eyes drift away into the past.

‘Mavis Brierly,’ she says. ‘Fattest girl at school, though I don’t know how; no one had much money to buy so much food. After that, I met a woman in the maternity ward when I was expecting Timothy – can’t remember her name … began with a “C”, if I remember rightly. So, two people. Though they’re probably dead now. Most people I know are.’

The last time it happened was six years ago. It was the woman who used to work in the bakery a few doors down from the shop I used to work in. If it hadn’t been for Jack, I’d have a restraining order against me.

‘Obviously not. There are only three hundred and sixty-five days in a year, and millions of people in this world.’ She leans towards me again. ‘Why do you ask? Has Tenko in there got the same birthday as you?’

‘Sheila! You must stop talking like that. Everyone deserves a second chance.’

Ellen clears her throat. She’s standing at the doorway.

‘This book,’ she says. ‘I think it might be valuable. It’s a Harry Potter first edition.’

Sheila picks up a pen and writes on the notepad next to the till on the counter. She pushes it towards me when she’s finished. She’s probably a thief.

My face grows hot as I rip the sheet from the pad. I screw it up and drop it into the bin, before ushering Ellen back into the storeroom. She can’t have seen what Sheila wrote, but she will have noticed the whispering, and the silence that followed her presence.