This is my first ever blog blitz, ooh check me. Thanks so much to Katherine and Verve Books for asking me to take part. Please check out the other stops on the blog tour. 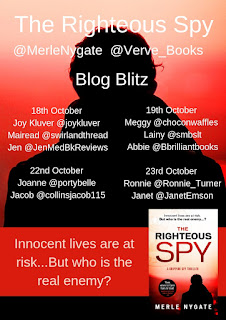 I have a wee press release for "The Righteous Spy" by author Merle Nygate.

THE RIGHTEOUS SPY | MERLE NYGATE
VERVE BOOKS | 18.10.18
WINNER OF THE 2017 LITTLE BROWN / UEA CRIME FICTION AWARD
Innocent lives are at risk. But who is the real enemy...?

Eli Amiran is Mossad’s star spy runner and the man responsible for bringing unparalleled intelligence to the Israeli agency. Now, he’s leading an audacious operation in the UK that feeds his ambition but threatens his conscience.

The British and the Americans have intel Mossad desperately need. To force MI6 and the CIA into sharing their priceless information, Eli and his maverick colleague Rafi undertake a risky mission to trick their allies: faking a terrorist plot on British soil.

But in the world of espionage, the game is treacherous, opaque and deadly…

A twisting international spy thriller, A Righteous Spy is a shocking page turner that portrays a clandestine world in which moral transgressions serve higher causes. A must-read for fans of Homeland, Fauda, The Americans and NCIS, it will also appeal to readers of Daniel Silva and John le Carré.

‘A tense, compelling thriller, The Righteous Spy combines the high drama of a spy story with a clear-eyed telling of the grubby compromises and betrayals that are the reality of agents’ lives. With vividly drawn characterisation and a gripping plot, I couldn’t put it down’ – Harriet Tyce, author of Blood Orange

‘Relentless - goes where le Carré fears to tread. Merle Nygate’s characters, their tradecraft and their dramas leap off the page in a spy tale that is as gripping as it is authentic’ – Martin Fletcher, author of Promised Land

Verve Books is a dynamic digital publisher, inspired by a love of great, original, page-turning fiction led by a team of passionate book lovers.
In a swiftly changing world where great ideas don’t wait for long lead times, we understand that readers want the best books now and that’s why we’re focused on delivering high quality eBooks around the world.
With many years’ experience in traditional publishing, our team has editorial and marketing expertise which is second-to-none.
Verve is open to submissions from published and unpublished authors of commercial fiction across all genres. As the company name suggests, each book project will be approached with ‘vigour, spirit and enthusiasm’.
‘The opportunity to be published by Verve, a digital publisher, is absolutely brilliant. Espionage is politics and politics is currently moving like a runaway train, so digital, with its short lead times, is the perfect fit. Researching and writing The Righteous Spy has been the most intense creative experience I’ve had. Inhabiting the minds of diverse characters who are doing bad but think they're doing good has been fascinating and, I think, timely’ – Merle Nygate
vervebooks.co.uk
Posted by So many books, so little time at 08:01