Today is my stop on the blog tour for A Christmas Gift by Sue Moorcroft. I know I know you are thinking it is October for goodness sake BUT if like me you like to plan ahead for some of your seasonal reads then this is perfect. I have an extract so if you have a wee read at that and like it, there you have your first Christmas book sorted, organised or what!. 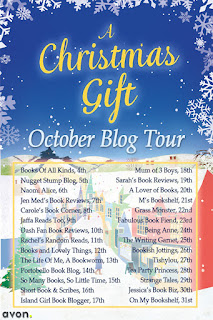 Queen of the lightning-fast shower, she switched on the water, wriggled out of her running kit and hung it on the radiator so it wouldn’t be clammy for the run home, and jumped into the spray. Soon she was dressing in the clean clothes she unrolled from her backpack. Two further minutes with hairbrush, tinted moisturiser and mascara wand and she was ready to start her day.

As she emerged into the corridor, students were streaming towards rehearsal rooms or first sessions, crowding her with their backpacks and instrument cases and confining her pace to what she thought of as ‘the student shuffle’.

Chatter and laughter rippled through the air. Georgine smiled. She loved this time of year. Halloween and bonfire night had passed and now the students were looking towards the main event of the term: Christmas. Already posters advertising A Very Kerry Christmas, Uncle Jones were appearing in Middledip, Bettsbrough and even as far afield as Peterborough.

Some of the students called, ‘Hey, Georgine!’ and she returned their greetings, only pausing when a tall, solemn youth with a guitar-shaped gig bag on one shoulder fixed his gaze on her and announced sternly, ‘Got me grade seven acoustic guitar.’

Not fooled by the unsmiling delivery from Tomasz, a student generally held to be ‘challenging’, she raised her hand for a high-five. ‘Fantastic, Tomasz! That’s awesome!’ ‘I’ll get a stiffycut.’ Tomasz’s heritage might be Polish but his accent was pure Bettsbrough. He performed his part in the high-five as if obliged to humour her, but triumph shone in his eyes before he turned away.

Georgine was still grinning at his pronunciation of ‘certificate’ when she reached the office suite, calling ‘Morning!’ to Fern as she passed through the admin office and reached the door marked Norman Ogden at 8.30 a.m. precisely. 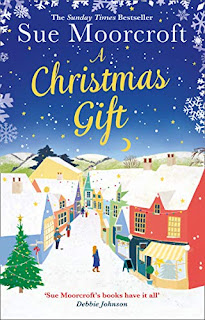 "A Christmas Gift" is out to buy now on kindle, click HERE or in hardback from the 1st of November.