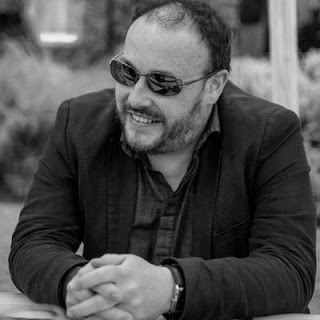 Welcome to the lovely Russel D McLean to So Many Books, So Little Time. Thanks so much for taking some time out to answer some questions for us and chat about your book "Ed's Dead". 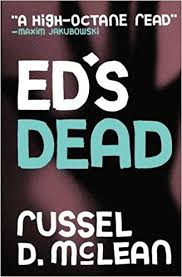 Location is massively important to me – I really believe that location is intrinsically connected with action in a story. That is, a story told in one location won’t necessarily work in another. I wrote five books set in Dundee, but I knew when it came to Ed’s Dead and my previous novel, And When I Die, that Dundee wasn’t the location for those stories. They just wouldn’t feel right.

Sometimes that’s a matter of instinct, which was more or less the case with Ed. I could have done a similar story in Dundee, but the city’s much smaller and so it would have been harder for Jen to hide from the police in the ways she does early in the novel.

I live in Glasgow these days, and I’m still discovering things about the city every day – a number of locations in Ed’s Dead are either real, or based on real locations (Jen’s flat, for instance, is not in the same location but does have the same layout as my girlfriend’s old flat, and the abandoned buildings that appear a little later are genuine, too)


What was the inspiration for Ed’s Dead?

There were a few ways Ed’s Dead came into being, and as always with writing, it was just that the ideas came together at the right time. I’d always wanted to write something more “noir” than the McNee novels, which were PI novels with a recurring characters. I wanted something a little old school where somebody who’s just an ordinary citizen makes a very bad mistake and has to pay for it. I knew that it had to be a death, and I knew they had to hide it. But I was conscious of clichés, and thought that generally what you say is a man accidentally killing someone and trying to hide it, so what it was a woman? And what if she was perfectly “ordinary” as in, she was someone you could meet on the street?

Ed himself is based on a number of men that I’ve heard about over the years. Once I started asking women I knew about rubbish boyfriends, some of the stories that came out really shocked me. I can never wrap my head around that kind of guy at all, but they clearly exist.

I also wanted to get a few things out of my system from my former life as a bookseller. Mostly the sense of frustration that can come with the job at times. Some of those customer conversations are absolutely genuine, even if I tweaked them a bit for comic effect. I also just wanted to have a bit of fun and pay some kind of homage to all the wonderful and brilliant booksellers I’ve known over the years. Speaking of which, the cop “Crawford” is named for my old boss in Dundee, who just released his first book the other week. Not a crime novel, but a book about the history of Peat – INTO THE PEATLANDS by Robin A Crawford is definitely worth checking out if you have any interest in nature writing.


The female character starts off a bit “weak” then becomes a pretty strong badass, was this deliberate?

Absolutely deliberate. I was determined to try and challenge some of the “male gaze” stuff that male writers like myself can be guilty of. In order to do that I had to start off with some assumptions and try and break them down a little. Jen seems weak only because other people have kind of told her she is. The romantic role model of falling for a “bad boy” and so forth puts her in a position of weakness. But as the novel goes on, she finds a part of herself she had never been encouraged to explore, and she really embraces it.

I was determined Jen wouldn’t be a “manic pixie ass kicker” like Lisbeth Salander, or a victim in any way. I wanted her to be as normal as possible and almost muddling through this insane situation like any of us would.

I was very deliberate about getting women to read the early drafts of the book, and was pleasantly surprised at how positively they all reacted to the portrayal of Jen. That was a huge confidence booster.


Will we see any of the characters from this book again?

That’s a tough one to answer. I originally had plans to hook up Jen with Kat from my previous novel, And When I Die. The two of them do know each other (some characters appear in both books, and Jen references the events of And When I Die a few times) but that book is on the back-burner for now until I can get exactly the right reason for them to pair up. But when they do, I think its going to be a blast!


This was my first time reading your work, if you could advise readers where to start which book would you select and why?

At the moment, I would say AND WHEN I DIE is a good starting place, followed by ED’S DEAD (or maybe other way round). My first five books, set in Dundee, and featuring PI J McNee should preferably be read in order of publication as they tell one larger story, although they are designed that you can read them in any order if you prefer.


What started your journey into writing?

I was always a big reader, and I always preferred the company of my own imagination as a child. I have “diaries” I wrote in from primary one, still, where instead of talking about what I did that day, I’d tell stories in multiple parts (the one that still makes me laugh was about a bunch of woodland animals who believed that a tree was haunted until they realised it was an owl stuck inside and unable to get out). My primary teacher, Mrs Bruce, really encouraged it, too, writing things like “I can’t wait for the next part!”

When I got older, I was interested in acting, but as much as I loved it, I preferred the act of creation that came with writing. Then, my dad started getting stories published on the radio – and getting paid – and this little thing went off in my head, where I thought it might be possible to write for a living instead of doing something ordinary. It took me a long time and a lot of mistakes to get published, but I made it in the end!


What has been your best and worst part of being an author?

The best part is literally doing what I love. I adore stories and storytelling. I love pulling apart the fabric of what makes fiction tick (which is why I also partially earn a living as an editor/teacher for various publishers and organisations) and so to do something I adore and be paid for it is brilliant. This is what I want to do, and this is what I love doing.

There are two worst parts. One is the fact that authors don’t make a lot of money. Seriously, it’s tough to make a living at this full time. JK Rowling and Lee Child are basically the exceptions, and most of us scrabble by on part time wages at best. That’s how I fell into editing and teaching, which thankfully now make up the shortfall, and why I spent over a decade as a bookseller. But honestly, all I want to do is spend time crafting and perfecting these worlds that exist only in my head until I put them down on the page.

The other worst part is less of a problem and more of an irritation, but it’s the people who think that you spend all day sitting around staring into space and waiting for the muse while raking in royalties. Someone recently asked, “Why don’t you just write a bestseller?” as though it was the easiest thing in the world. It isn’t. It should, however, look easy to the reader. I think that writing, as a general skill people have to communicate, is relatively easy, but writing well and crafting a dramatic narrative that connects and convinces an audience is bloody difficult.


What are you working on next?

I’m working on what I think might be a new Dundee-set trilogy. I don’t want to say too much more about it until it’s in a better state, but it’s relatively dark and set in 1978, and I’m bloody loving doing the research for it.

I’m really active on Twitter - @russeldmclean – and less so on Facebook and Instagram (but stuff appears there from time to time). My website is occasionally updated at russeldmcleanbooks.com, too.
In the real world, this October I’ll be with the Bearded Sex God (his words, not mine!) Stuart MacBride at the Falkirk Festival on 6 October - https://www.seetickets.com/event/stuart-macbride-and-russel-d-mclean/falkirk-trinity-church/1246301 which will be great fun. We’ve done a few “pie and pint” events before, so this our “wee tipple” one.

I’ll also be doing some events for Book Week Scotland very soon, so, you know, watch Twitter and the website for more details on those!


Anything you want to add that I haven’t asked?

I always like to give a shout out to other authors (it’s the bookseller in me) so on my to-read list right now is TRAP by Lilja Sigurdardottir, FEBRUARY’S SON by Alan Parks, and a re-read of MONEY SHOT by the magnificent Christa Faust. Oh, and you should all read THE CRY by Helen Fitzgerald, which is just about to be shown as a major TV adaptation on the BBC!


And if that isn't spoiling you guys enough, I am giving my pre loved copy away of Ed's Dead, modelled by Princess Trixie. 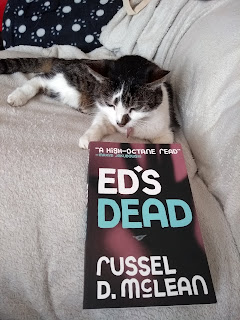