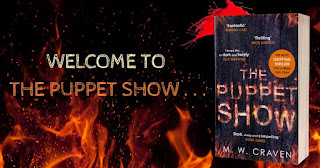 Today is my stop on the blog tour for The Puppet Show by M W Craven, please check out the other stops as we all offer different content and it is a belter of a book!

The Puppet Show by M.W. Craven
My rating: 5 of 5 stars

A serial killer is burning people alive in the Lake District's prehistoric stone circles. He leaves no clues and the police are helpless.

When his name is found carved into the charred remains of the third victim, disgraced detective Washington Poe is brought back from suspension and into an investigation he wants no part of.

Reluctantly partnered with the brilliant but socially awkward civilian analyst, Tilly Bradshaw, the mismatched pair uncover a trail that only he is meant to see. The elusive killer has a plan and for some reason Poe is part of it.

As the body count rises, Poe discovers he has far more invested in the case than he could have possibly imagined. And in a shocking finale that will shatter everything he's ever believed about himself, Poe will learn that there are things far worse than being burned alive...

Poe is a cop who gets things done, no matter how many toes he needs to step on. If "The truth is out there" had a human representative, Poe would be it (non supernatural). Pulled from suspension after special focus from a killer, Poe is on the case. A serial killer who is burning his victims alive and leaving them on display, un linked and with no idea who is next the team need all the help they can get. Meet Tilly Bradshaw, genius, socially innocent, one of the best analysts the force has and a misfit. Two total opposites come together to try and find the killer before they can strike again.

Guys, I hope this is one of the series that goes on for a long long time. I LOVE Tilly, she is a genius but total innocent, speaking the truth as she finds it with no thought for social reaction she is both refreshing and hillarious whilst being totally unaware. Poe is a man of the world, he knows exactly what kind of vile creatures are out there, polar opposite and I can't think of a better duo to bounce off each other. You know how kids tend to have no filter and say things in pure innocent that adults can baulk at, that is Tilly but she is off the charts smart. I loved her and could have read about her all day. Poe is a wee bit rogue but quick to stand up for the underdog or anyone being treated badly, again who doesn't love that, two good guys but in non conventional style.

The murders themselves are brutal and the reader is taken along with the police to try and figure out the who and why, why are these victims selected. Why is the bad guy so smart and seemingly miles ahead of the police. Office politics, police procedure, bullying, justice, banter and some laugh out loud moments are only some of the things this book has to offer.

It is busy, it has action, moral character and a few scenes that make you a bit uncomfortable, I hate anyone bullying folk and Tilly is such an easy target. We see her go on a wee journey, actual journey and a wee self discovery, I was whooping and cheering along the way, Poe is pretty epic too, under the gruffness he has a heart of gold.

This was my first time reading this author, I will check out his other books and wait with baited breath for book two. Super stoked to see what is in store for the characters, if I hadn't had stuff to do I would have sank this in one sitting, 5/5 for me. Pacy, gritty, funny, horrific, enthralling and a page turner pretty much through and through, when a book makes you air punch you KNOW you have found an epic read!