Today I am the final stop, closing the blog tour, for Bait, Grist & Security by Mike Hodges. If you didn't catch the previous tour stops please check them out as everyone has different content so worth checking out.

Bait, Grist & Security is available to buy on amazon, ebook and treebook format, CLICK HERE to order yours. 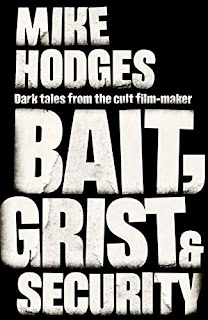 About the author: Mike Hodges

Mike Hodges was born in Bristol, UK. As a television producer in the 1960s, he was invited to join the investigative programme World in Action. This took him to the US, covering the 1964 presidential election, and that same year to the war in Vietnam. He produced and sometimes directed the arts programmes Tempo and New Tempo. He is perhaps best-known for his work in cinema and television, including: Get Carter, Suspect, Rumour, The Manipulators, Pulp, The Terminal Man, Flash Gordon, A Prayer for the Dying, Morons from Outer Space, Florida Straits, Black Rainbow, Croupier, and I’ll Sleep When I’m Dead. He lives in London. This is his first book.

Mike Hodges is the director of the 1970s crime classic Get Carter, which is widely considered one of the greatest British films of all time. These novellas are marked by the same combination of style, grit and deadpan humour that have attracted a cult following to his films. For fans of Derek Raymond (He Died With His Eyes Open), Andrei Kurkov’s Death and the Penguin and Martin McDonagh’s film In Bruges, as well as classic American noir in the vein of Raymond Chandler and James Ellroy. 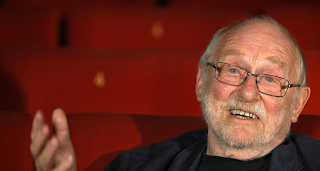 I have a wee extract from chapter two for you:

Early that same night, the last train had arrived on time. At exactly
21.36. The two carriages, all that remained of the express from London, are shunted backwards to the deserted platform.
Ayling-on-Sea is at the end of the line.
Water gushes through a hole in the station roof. A solitary passenger alights, slamming the door shut. He notes the rain splattering the platform, puts down his tattered suitcase, and slips a finger into the galosh that’s become dislodged. Opening a black umbrella, he proceeds to the unmanned ticket barrier.

Outside, a sign indicates a vacant taxi rank. The passenger moves to the courtesy phone housed under a plastic hood and picks up the receiver.
The line is dead.

Cussing, he starts his walk into town.

* The Journey’s End boarding house is at the unfashionable end of the esplanade. A ‘Vacancies’ placard dangles seductively between the frilly curtains of the front room. The passenger lowers his umbrella to study a scrap of paper before pressing the bell. The red and yellow sunrise pattern of the glass front door is abruptly illuminated as a figure comes to open it.

The passenger steps back to fully appreciate the woman standing before him. ‘Mrs Westby?’
‘Mr Snazell?

‘That’s me.’
‘En suite for one night?’
‘Correct,’ he looks her over. Enough curves to drive a man crazy. ‘Although the view’s so good I may stay longer.’
Snazell eases himself past Mrs Westby’s buffer breasts into the small hallway, his eyes fixed on her white silk blouse and the black ruched brassiere peeping out from behind a wayward button. Lewdness is an essential ingredient in Sandra Westby’s life. She enjoys being an object of male desire. Her glistening blood-red lips shape themselves around each word before finally setting it free.

‘You’re my only guest tonight.’ ‘One-on-one. Great.’
‘Choose a room between 1 and 15.’ ‘69.’
‘Don’t be saucy now. I’ll put you in 13.’ ‘13 – that’s my lucky number.’
‘I’ll put you in 7 then.’
She plucks a key off a board behind the small counter and starts up the stairs. Snazell follows, his attention alternating between her arse rotating inside a tight silk skirt and the immaculately straight seams of her black stockings. Reaching the second landing, she opens Room 7 and switches on the light. Snazell steps inside the small room. He immediately pumps the mattress, appreciatively.

‘Very nice. Nice and hard. The way I like it.’ He sits on it and bounces a couple of times. ‘Bet this bed could tell a few stories.’
‘Only cries and groans,’ replies Mrs Westby. ‘Of eternal love?’
‘I wouldn’t go that far, Mr Snazell.’ ‘Hanky-panky?’
‘That’s more like it.’
She sighs as she shuts the door then opens it again. ‘The bar will be open for aperitifs in half an hour.’
Left alone Snazell snaps open his suitcase. Lifting out several pairs of thermal underwear and woollen pyjamas, he reveals the tools of his trade: binoculars, bugging equipment, and a Smith & Wesson .32 automatic with silencer.