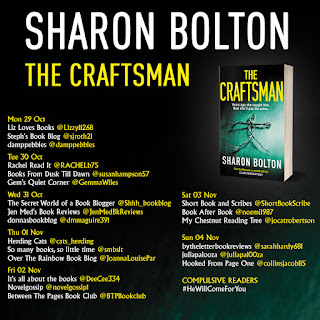 The Craftsman by Sharon J. Bolton
My rating: 4 of 5 stars

August, 1999
On the hottest day of the year, Assistant Commissioner Florence Lovelady attends the funeral of Larry Glassbrook, the convicted murderer she arrested thirty years earlier. A master carpenter and funeral director, Larry imprisoned his victims, alive, in the caskets he made himself. Clay effigies found entombed with their bodies suggested a motive beyond the worst human depravity.
June, 1969
13-year- old Patsy Wood has been missing for two days, the third teenager to disappear in as many months. New to the Lancashire police force and struggling to fit in, WPC Lovelady is sent to investigate an unlikely report from school children claiming to have heard a voice calling for help. A voice from deep within a recent grave.
August, 1999
As she tries to lay her ghosts to rest, Florence is drawn back to the Glassbrooks' old house, in the shadow of Pendle Hill, where she once lodged with the family. She is chilled by the discovery of another effigy - one bearing a remarkable resemblance to herself. Is the killer still at large? Is Florence once again in terrible danger? Or, this time, could the fate in store be worse than even her darkest imaginings?

Florence Lovelady is a police officer, we open with her at a funeral, the funeral of a killer, 1999. We head back to 1969 when Florence was new to the area and just a WPC, not only having the difficulty of working a case with missing kids but trying to carve her place in the team, being a woman! As another child goes missing, this one closer to home, more pressure mounts on the team and Florence is more and more a likely target for the fall guy. All eyes are on Florence, the cops, the townsfolk and even the killer!

There is a lot going on in this book, child murder, kidnap, small town, sexism, inequality, bitchiness, police investigation, relationships, due timeline and witchcraft! I would have LOVED to have seen a lot more dedicated to the craft, in the throwback time period we do have some. When we flip to the present again we have some but for me, for one character there is a huge chunk missing from A to B. I know that is a bit vague but I don’t do spoilers, I just felt there was a fantastic opportunity to give us more on the how people came to get into the craft. I did love the history parts and they say an author is doing their job when they leave you wanting more. I do find witchcraft and anything of that ilk, when done right, can make a great thread in a story, what I did get here I thought was great.

There are atmospheric scenes, the killer buries them alive - can you think of anything worse! Bolton does fantastic scenes with realism to have the reader holding their breath, heart pausing and the hairs on the back of your neck standing!

Emotions were high, the treatment of the young Florence at the hands of the other officers, sexism, bullying, complete disregard for valid points purely because she was a woman. The level of hatred and nastiness really ripped my knittin. I suppose for the time period it would probably be commonplace but I was absolutely infuriated.

The book has a good pace, grabs you pretty much from the beginning. The timelines are easy enough to follow as it starts in the 90s, heads back to the 60s and highlights when you are back to the 90s. Whilst we know early on who the bad guy is there is plenty of intrigue and mystery to keep you going with sidelines supplying surprises as you get into it. Sure I have read Bolton before, I know I have some of hers on my shelves, I will need to dig them out for sure, ⅘ for me this time.