Today is my stop on the blog tour for Hard Return by Rosie Claverton, all stops are different so please check out the other stops.

Some info for the book and author 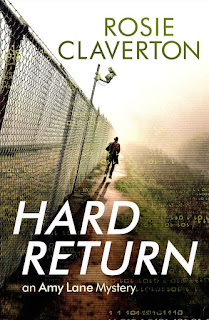 BLURB: 12 men locked in a compound. 12 men watching their every move. 1 man murdered. When Jason's friend Lewis is trapped in a secret prison compound with a murderer, Jason must go back behind bars - but Amy won't let him go in alone. Hiding their intentions from both the convicts and their watchers, they work together to find justice for the murdered man while keeping their cover. As the danger mounts, Jason, Amy, and Lewis find there might be no escape for any of them - except in death. 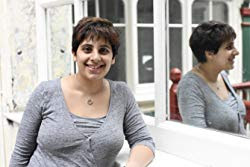 ABOUT THE AUTHOR: Rosie Claverton is a novelist, screenwriter, and junior psychiatrist. She grew up in Devon, daughter to a Sri Lankan father and a Norfolk mother, surrounded by folk mythology and surly sheep. She moved to Cardiff to study Medicine and adopted Wales as her home. She then moved to London to specialise in psychiatry.

Between writing and medicine, she blogs about psychiatry and psychology for writers in her Freudian Script series, advocating for accurate and sensitive portrayals of people with mental health problems in fiction.

Recently returned to Cardiff, she lives with her journalist husband and their nearly new daughter.

For my stop on the tour I have a guest post, enjoy.

Guest post When Second Fiddle Takes Over the Orchestra: Developing a Cast Over a Series

I don’t usually go back to re-read my old novels. However, when the first two novels in The Amy Lane Mysteries were relaunched this year, I spent a lot of time back at the beginning of the series. And I realised exactly how much my characters had changed and shifted over the course of the books.

At the beginning, my concept revolved around my two protagonists – Amy Lane, agoraphobic hacker, and Jason Carr, streetwise ex-con. They were complementary characters, growing together to solve crimes with aligned strengths and weaknesses.

The third POV character was Bryn Hesketh, a middle-aged police officer trying to make sense of an increasingly criminal Cardiff. His sidekick was the baby-faced Owain, an eager pup of a detective. Jason’s baby sister Cerys was a teenaged brat who had to see the consequences of her actions first-hand before she could grow up.

Hard Return is the fifth novel in the series and it marks a shift in direction. The first three novels form an arc where Amy and Jason are making and breaking their relationship, before they reach crisis point at the end of Captcha Thief. Terror 404 – the fourth novel, of course – is about reforming them as new partners, about to embark on a new journey together.

But their travel companions have also experienced trials and tribulations, victory and despair. Bryn has become more world-weary, more jaded, and has faded into the background as the younger, more volatile characters come to the fore. Owain has survived a near-death experience as a changed man, making decisions that break him apart from the group, walking the line between friend and enemy.

And little Cerys Carr became a police officer, and now the third POV character for my fifth book. She was only ever meant to be a background figure as part of Jason’s family, but readers loved her, and that made me see her differently. She also joined forces with Catriona, a character I threw into my second book as a foil within the police department, who then demanded I pay more attention to her and her sensible jumpers, her outdoor exploration, and her flaming red hair.

When I was making Jason’s criminal past, I also threw in his former best friend Lewis as part of a brief description. Little did I know that he would be opening a novel four years later! Exploring a character in depth who has been a constant presence throughout the series was a great way to explore Jason through their relationship, as well as Amy’s reactions to someone else enjoying a close friendship with Jason.

It’s hard to keep in touch with old favourites without alienating new readers. A couple of series antagonists make a reappearance in Hard Return, and I try to show how they are intimidating and powerful without rehashing all the bits of backstory that brought them to this book.

What started as a two-hander has organically grown into an ensemble cast, a family of characters that me and my readers have invested in. I wonder where we’ll be in five novels’ time!