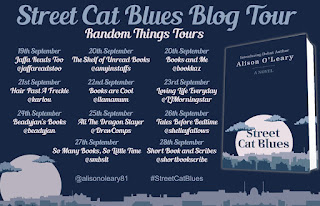 Today is my turn on the blog tour for debut novel "Street Cat Blues" a serial killer story with a difference. Please check out all the stops on the tour as we all offer different content. 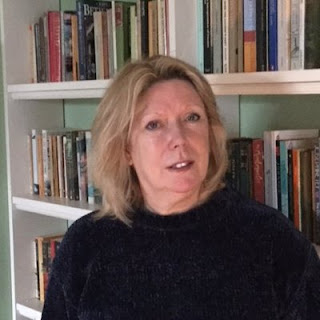 Street Cat Blues by Alison O'Leary
My rating: 3 of 5 stars

After spending several months banged up in Sunny Banks rescue centre, Aubrey, a large tabby cat, has finally found his forever home with Molly and Jeremy Goodman, and life is looking good. However, all that changes when a serial killer begins to target elderly victims in the neighbourhood. Aubrey wasn't particularly upset by the death of some of the previous victims, including Miss Jenkins who Aubrey recalls as a vinegar-lipped bitch of an old woman who enjoyed throwing stones at cats, but Mr Telling was different. Mr Telling was a mate ...

Aubrey is living with his new humans Jeremy and Molly after being adopted from Sunny Banks rescue centre. Aubrey has been around a bit, different owners and as he isn't getting any younger he doesn't want to go back. However there is a killer around his neighbourhood and now one of his human friends has been killed. Aubrey has that to contend with and the normal worries a feline has, territory issues, keeping things calm with fellow cat buddies and his relationships with humans.

This is a cute wee debut - weird thing to say when a killer is involved but really the cuteness is the cat, the killing happens very quickly and then we see everything through Aubrey. As Aubrey is a cat other things are more pressing at times than a killing and we follow him around the neighbourhood. This isn't a book where the cat speaks to the humans although he understands everything around around him, the human interactions and he speaks to his fellow cats.

The book has several threads to it, the serial killer/murder side, Aubrey's interactions/relationships with the humans around him and his standing in the cat community and the goings on in there. The murder pulls you in to start with and as the story goes in you have a vested interest in Aubrey, his life and an insight into the goings on in the cat world. I think a Q&A would be grand with this author so get a bit more chat about what she did to come up with some of the things she has. I have read a few books this year where the main character was an animal, I quite like it. It gives the reader a different narrator and perspective which can be a breath of fresh air when you read as many books as I do. It was nice to read other issues within the main story lines, poverty, being an outsider, there is a little bit of swearing and some terminology that could offend some readers however most of that is down to one character and does not feature greatly in the book at all.

If you are looking for something different I absolutely recommend this, murders, skulduggery, some deeper issues, relationships, cat business and the cat as a main character, quirky, fun and a bit deep, 3.5/5 for me this time. Not sure if this will be a series or just a one off but I would like to read more adventures with Aubrey!