Today is my turn on the blog tour, please check out the other stops as everyone offers different content on their stops. 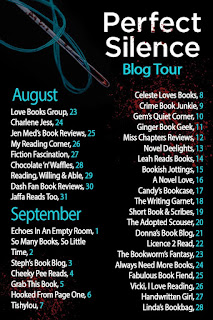 Thanks so much Helen for taking time out to answer some questions.

Tell us a bit about the book?

The book has two strands. The main case has MIT on the hunt for a vicious killer who cuts the shape of dolls from the skin of young women. DCI Ava Turner is also pursuing a group who are mutilating Edinburgh’s homeless and drug user communities, and branding them. It’s very much a plot driven book, with less emphasis on Luc and Ava’s personal lives, but that will resurface with a vengeance in book 5! Perfect Silence is pretty dark, but that’s how I like to write.


Is it easier writing a book as the first in the series or down the line in a series?

For me, it’s easier to write the first book in terms of the creative freedom I have. There’s no worrying about what happened before, staying true to characters or continuity. On the other hand, it’s a wonderful thing to see your characters grow and evolve. As a writer, your relationship with them grows in a way that feels very real, but keeping the material fresh is the real challenge in a series.


What was the inspiration for your book and characters?

I was heavily influenced by Edinburgh itself, which lends itself so perfectly to the dark, more gothic-based literature, and the first book in the series - Perfect Remains - was very disturbed indeed. Perfect Silence has also been influenced by my new life in the USA, and the way religion touches so many lives but can become a twisted and powerful excuse for a weapon in the hands of a tiny number of psychopaths. The secondary storyline is a personal concern of mine relating to the way we treat the homeless, and how we often choose not to see them. Crimes against the homeless go largely unreported. The sexual and violent assault statistics are so far out of proportion to the rest of society that it’s hard to comprehend, and yet they have the lowest resolution.


Are the characters based on anyone?

The characters are really bits of people I’ve encountered over the years. I spent several summers in France and fell madly in love with a pen friend’s brother, who I suspect is responsible for Luc. Having worked as a criminal barrister, many of my antagonists have small elements of some of the dangerous and unbalanced people I met over the years. Ava came entirely from my imagination, although she’s really just the woman I wish I had been - smarter, funnier, tougher, more secure.


What inspired you to start writing?

I’ve always wanted to write, but the demands on me when I was in court every day were too great to allow me the freedom to get creative. By the time I’d had three children, I’d given up being a barrister and was working in my husband’s production company. That was when I picked up writing again. I self-published two books to flex my creative muscles, then managed to sign with an agent. I’m now writing my sixth book and I haven’t looked back. Crime was a natural fit with the work I used to do, and I’ve always preferred reading pretty scary stuff. I just write the type of books I like reading.


What is your favourite book in the world in why?

My favourite book, ever, is The Handmaid’s Tale. I read it during my sixth form and it left a mark on me that hasn’t diminished over the years. I’m currently watching the TV series so it’s back on my mind again, but there’s been a general rise in Dystopian fiction that highlights how women are controlled by governments and religions. The Handmaid’s Tale, of course, has been proved to be horribly real and Atwood’s vision of the future, whilst grim, was remarkably astute. That said, my favourite book changes from year to year, so ask me again in another 12 months!


What is next for Helen?

I’m tinkering with an idea for a screenplay (don’t tell anyone) and as soon as I have a free month I’m going to start writing. In the meantime I travel regularly from California where I live back to the UK so there’s never a dull moment. Living near Los Angeles makes everyone dream of writing that killer movie script, I guess.


Will there be more books in the perfect series?

I’m just finishing book 5 (Perfect Crime) and there’ll certainly be a book 6. Expect book 5 to have a greater focus on the relationship between Luc and Ava (with mountainous ups and downs) and a resolution that will have readers of the series screaming at me.

Mainly on Twitter @Helen_Fields (the great time vortex - rescue me). I try to respond to anyone who contacts me. I love the immediacy and brevity of it, and the fact that everyone’s on a level with each other. Also Facebook though, and it’s fun engaging in a relaxed way. I love the contact with readers that social media brings. No author writes in a vacuum. Getting feedback is what makes it all worthwhile.


Anything else you would like to answer that I haven’t asked?

If people love my books, how can they show it? With liquorice, of course. I can never pass a sweet shop without treating myself.