This is later than I meant to post, the festival finished last week then me and the o/h went on a wee mini roadtrip and seen some family. 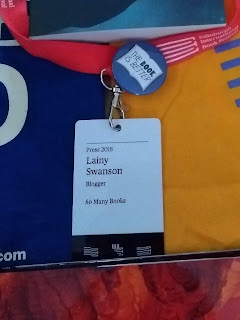 This was my first ever book festival, it won't be my last, if you have been following the blog you will have seen the coverage of the days I went to and events I attended.


I went through to see Denzil Meyrick who was sharing the stage with Kjell Ola Dahl, the event chaired by Philip Ardagh. I was hoping to meet up with a fellow Crime Book Club member but I missed her, I did meet the beautiful Mary from Live and Deadly blog and Karen from Orenda Books lovely ladies and very welcoming. 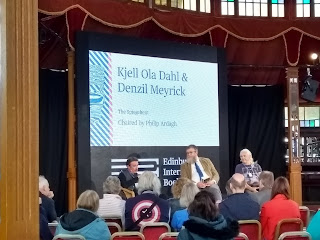 Denzil comes to the stage with a dram of whisky and took a wee live video of the audience (full room guys, pow!) before we begin. Kjell writes Nordic Noir, police procedural "The Oslo detectives" and is from Norway. Kjell's novels are now translated in english and available to buy (what are you waiting for). Kjell finds it inspiring to explore differences in his writing, classes, politics, oil, money, society and what people are affected by. Kjell has a very quiet manner, soft spoken but you find yourself leaning forward, taking in every word, whilst his volume is low his words/vibes are loud and riveting. 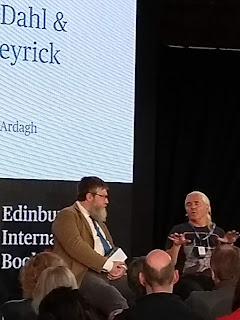 Denzil started writing when he was ill and didn't expect much to come of it. After a bit of a palaver with another publisher he was rescued by Polygon and the rest is history. He writes about Daley and a wee place called Kinloch (really Campbeltown) a unique place in Scotland that has a sense of 50s or 60, an otherness and means a lot to him, everyone should visit. Denzil has an ease and jokey manner making everyone at ease and was a good combo with Kjell's quieter presence. Denzil spoke about his career (he used to be a police officer) and how different things are now compared to then (he joined in the 80s) and how policing is different in the city compared to small towns. His books are all police investigation, murder, relationships, dynamics of the team and people with a bit of swearing and infused with Scottish banter. 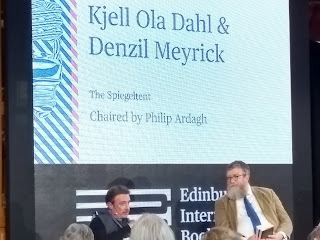 Kjell's book brings in a lot of artifacts, important folklore and likes to play with the idea "you don't know everything", he enjoys mysteries himself. Denzil likes to bring a bit of humour into his books and engages with his fans on Twitter and Facebook, we may also be getting a Brian Scott twitter feed, how awesome would that be! Kjell is on social media, you can find him on Twitter and read about him on Orenda's website, he is on Facebook and Instagram. Talking of social media he admits he doesn't sell himself on there as he feels a bit of shame in it. He is such a nice well spoken man and whilst you all know I am not a fan of translated novels, after listening to him and recommended by both Mary and Karen I have bought his newest book "The Ice Swimmer" this is part of a series but I am assured I can read it not having read the others. Bargain price too and only brought out this year. Denzil's new book "The Relentless Tide" is out in two days, 6th of September but available to pre order now. I have jst read book one, I have all of his books waiting and cannot wait to get stuck in. Book one is Whisky from small glasses, fantastic opening to a series so if you haven't read him yet series grab a copy and then catch up with the others for the new book coming. 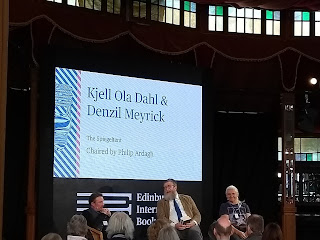 Friendship with other writers seems to be important to both writers, Kjell talks of a big group meet up with other crime writers at least once a year and at events like this, he feels he learns a lot from them. Denzil regales us with a meeting just before the event with Ian Rankin, a quick turn and some spillage of bodily fluid, whats happens at the festival stays at the festival, no one was hurt lol! He has a laugh about the ego maniacs that are authors, Douglas Skelton was in the audience and got a special nod for that then tells how he is limited in meetings due to his health issues. His next book, the one he is writing next, will see Daley visit some health issues and will be drawing from his own personal experiences. Humour aside, discussing juts how bad things got for him, facing his own mortality and his wonderful wife by his side. What a man! So much positivity and humour in the face of what would have been a terrifying time


An hour was just not long enough to listen to these gents, I would have happily sat there all day. I came away with a few books, some gifted, some bought and two new totebags (like I need more of either!). 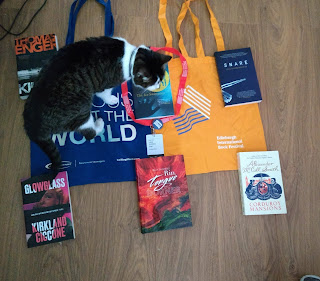 Trying to get the perfect shot is never easy when you have a kitty cat, let alone a diva like Princess Trixie. 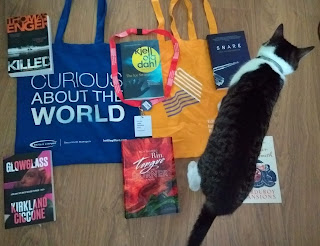 It took a few attempts (more than ten photographs) before I came to the realisation that if I wanted a proper piccy I would need to wait til miss paws was asleep, so I did. 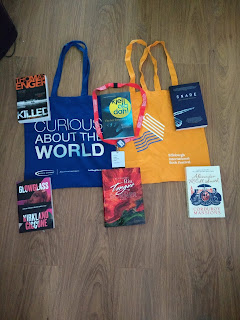 A fantastic festival, the staff were lovely, helpful and couldn't have done anything better. I had a wee sample of the food and you know how much of a fussy riot I am, lovely. Everything else I addressed in my original post so if you haven't been to a festival but holding back, please check it out. I cannot wait til the next and aim to go to as many other book events as I can, book people are the best!