Today is my stop on the blog tour for Overkill by Vanda Symon. Today I have an excerpt, have a wee read and let me know what you think. Have you read it? Please check out the other stops on the tour (see below) as we all host different content. I never used to be about book covers but either they have really upped their game in the last few years or I am just starting to pay more attention, how good is this cover! 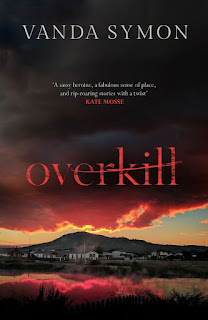 And you lucky lucky people, here is a wee excerpt from the book:

Once again, I pulled up outside the Knowes’ house, and once again I parked on the grass verge, taking care not to end up in the ditch. I paused at the gate to take in the deceptively tranquil scene before me. Only the presence of several other vehicles in the driveway, including a rather impressive new Range Rover, signalled that all was not as normal. That vehicle had to belong to Gaby’s mother – I’d heard Gaby’s family were well-to-do. Her parents had moved to Queenstown from Auckland to be closer to her when she married Lockie. Her father was a company executive and flew back up north each week when needed. Nice for some.

Gravel crunched underfoot as I walked back up the driveway. This time, no one came out to meet me. I stepped up onto the veranda and rang the doorbell. It was only a moment before I could make out a distorted shape through the stained-glass panelled door. It was Colin Avery.
‘Sam,’ Cole said, swinging the door open wide to let me in.

I bent over to take off my boots. ‘How’s things this morning?’

‘Much as can be expected.’

‘Thanks for staying with them. Lockie needed a mate around. What time did Gaby’s mum get here?’
‘Only quarter of an hour after you left.’ He paused for a moment and waited until I was next to him. ‘It was a very late night for us all.’

At the entrance to the lounge I stopped, aghast. I wouldn’t have recognised it as the same room. Where last night there had been pandemonium, this morning there was pristine order. There was a s

mall pile of Angel’s puzzle pieces, but otherwise the room – the whole house – was lemon-scented spotless. Someone had been very industrious. They still were, judging by the muffled sound of a distant vacuum cleaner.
‘Wow, who’s been busy?’ I asked Cole, who’d followed me into the room.
‘Leonore. She’s been on the go, non-stop, since she got up.’

‘I’m glad I took all those photos last night,’ I said as I took in a scene more House & Garden than family home. I had in fact toyed with the idea of leaving it until the morning. That would have been a major faux pas. Any trace of evidence looked like it would have been well and truly sanitised. I made a mental note to self for future reference: by the book, Sunshine, absolutely by the book. The higher echelons in the district office were applying constant pressure to justify my existence here. Resources in the force were limited, and stretching the budget by reducing the number of small stations was an obvious cost cutter. Pencilling in more hours on traffic duty was another. I cringed. It wouldn’t do to make it easy for them by making basic errors.

I could understand where Leonore Watson was coming from; I had witnessed exactly the same reaction in my mother in times of high stress or tragedy. Busy, busy, busy. Clean, clean, clean. Do anything other than accept the unfathomable had happened. Some people just operated that way. My personal method for dealing with stress involved dressing gowns, slippers, sofas and chocolate.

Involuntarily, I thought of my mother’s response if I died. Despite her well-constructed façade, her grief would be a yawning chasm, inexhaustible. Mrs Watson would be no different. I could only imagine what that family were experiencing – I’d been fortunate, untouched by the death of anyone really close.

I walked through the living room to the kitchen, where Lockie stared off into space while he fed something mushy into Angel. The poor girl had her mouth agape as she tried to track and apprehend the spoon. Lockie had a bristle of growth on his chin that only emphasised the look of desolation.
‘Lockie?’ He looked up, startled by the intrusion on his thoughts. Once again, I was rocked by how hollowed out his eyes looked. The terror from last night had been replaced by a haunted numbness. He gave a brief jolt of recognition and then a brave smile at my greeting.

‘Afraid so. Had to see how you all were.’

‘Bloody awful. Angel’s the only one who slept. My wife’s dead, it’s all a bloody mess and it’s nothing I can fix.’ He raised his hand to his mouth; large tears rolled down his cheeks. His brutal honesty did nothing to ease my discomfort. I turned my eyes away towards Angel.
‘God, Lockie, I’m sorry,’ I said, and realised instantly how useless those words really were. ‘I know this is not a good time, but I do have to ask you some more questions, and we need to do it while everything is fresh. I’m going to go and have another look around outside now it’s daylight. I’ll be fifteen minutes or so, then I’ll come back and we’ll go over things. You can do that?’

He drew my eyes with a look of resignation and weariness. ‘Yeah, of course. Angel’s almost finished.’ He sighed and managed

to get another spoonful into her mouth. ‘Everything seems to take so long. She wants her mother, not me. She won’t let me do hardly anything for her, not even brush her hair.’
I looked at her beautiful tousled curls. ‘She’ll be wondering where Mummy is, why she’s not here. It’s huge for you all.’ Everything I said felt so inadequate. ‘Look, I’ll go and do what I have to do outside, then I’ll be back soon to talk.’
‘Do you want Gaby’s mum there as well?’

‘Please. We’ll try and get through everything in one go, then we’ll be able to leave you…’ I didn’t finish the sentence; I didn’t know what to say. Leave you in peace, alone, leave you to grieve, leave you to wonder, blame, tear yourself apart? I left him with the best I could offer: a shrug and a gentle hand on his shoulder.


If you like the sound of the book you can buy your own copy of Overkill by Vanda Symon, from Amazon (also available in bookstores) by clicking here.  Available in both kindle and paperback format.