Today is my turn on the blog tour for "The Bloodless Boy" by author Robert J Lloyd. 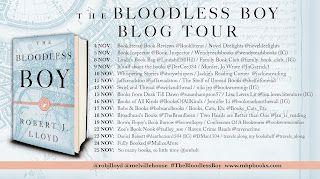 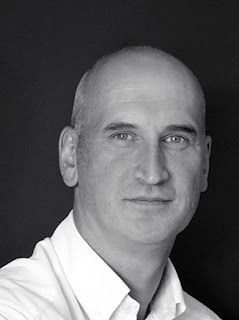 Robert J. Lloyd grew up in South London, Innsbruck, and Kinshasa (his parents worked in the British Foreign Service), and then in Sheffield, where he studied for a Fine Art degree, starting as a landscape painter but moving to film, performance, and installation. His MA thesis on Robert Hooke and the ‘New Philosophy’, inspired the ideas and characters in The Bloodless Boy. He lives in Crickhowell in the Brecon Beacons. This is his first book.

The book is out to buy now, click HERE to buy from AMAZON UK.

The Bloodless Boy by Robert J. Lloyd
My rating: 4 of 5 stars

Time taken to read - in an out over 5 days

The City of London, 1678. New Year's Day. The body of a young boy, drained of his blood and with a sequence of numbers inscribed on his skin, is discovered on the snowy bank of the Fleet River. With London gripped by hysteria, where rumors of Catholic plots and sinister foreign assassins abound, Sir Edmund Bury Godfrey, the powerful Justice of Peace for Westminster, is certain of Catholic guilt in the crime. He enlists Robert Hooke, the Curator of Experiments of the Royal Society, and his assistant, Harry Hunt, to help his enquiry. Sir Edmund confides to Hooke that the bloodless boy is not the first to have been discovered. He also presents Hooke with a cipher that was left on the body. That same morning Henry Oldenburg, the Secretary of the Royal Society, blows his brains out. A disgraced Earl is released from the Tower of London, bent on revenge against the King, Charles II. Wary of the political hornet's nest they are walking into - and using evidence rather than paranoia in their pursuit of truth - Hooke and Hunt must discover why the boy was murdered, and why his blood was taken. Moreover, what does the cipher mean?

London, 1678, the body of a child is found - drained of blood, London is in a state of unrest, fear, distrust and blame is being laid toward the Catholics. Robert Hook, Curator of Experiments in the newly formed Royal Society for the Improvement of Natural Knowledge with his assistant Harry Hunt are called in to investigate. What has happened to the boy, why take the blood, why was he murdered and is it anything to do with a plot against the king?

Historical crime, politics, religion, scientists in their early discoveries - it is a busy book! You can tell a lot of research and work has gone into it. My history knowledge is super patchy so there is plenty of the factual stuff that was new to me. I do enjoy reading up and seeing what has been gleamed from fact and infused into a book, it has been really well done and I think folk actually familiar with those parts of history would be impressed.

The chapters are short which you know I love but I think in this book it works really well because there is so so much to take in. Loads of characters, developments, sidelines, political, medical, plotting, underhanded behaviour, murder. Political stuff doesn't engage me nor religious but there is enough going on and chapters wee enough you are never stuck on any one thing and it is all relevant to where the story is going.

Some of the scenes are graphic and not for the faint hearted, there isn't lots of gore/violence but enough to say probably best not be eating if of a weak stomach and vivid imagination. Characters - Harry Hunt I liked, he seems like such a nice guy, curious, loyal and not seeing himself as worthy in certain aspects, I think I have a soft spot for him, wanting him happy not fancying. This absolutely doesn't read like a debut and I am looking forward to book two to see where the story goes, 4/5 for me this time!