Today is my turn on the blog tour for Rage by Suzanne Lowe. This is a @damppebbles #damppebblesblogtours (@DamppebblesBTs) blog tour. 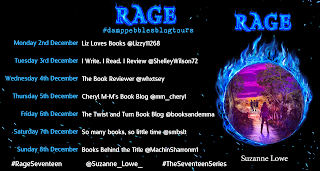 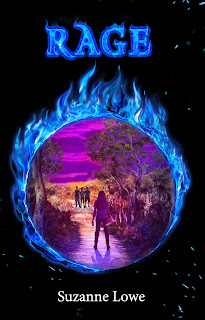 “Revenge. It was all he could think about.

His body ached for it, burned for it like a relentless fire waiting to be quenched. It was all he wanted.”

With the KV17 virus now in its mutated form and the older children infected, Jasper’s Bay faces an uncertain future as they attempt to find a cure.

When old enemies return, causing tension and turmoil throughout the town, Lexi must face her fears and suppress the rage building inside her. Will the virus take hold or can she maintain control? How can you defeat an enemy when it is part of who you are?

The exciting and compelling YA series set in the harsh Australian outback. Available to buy NOW from Amazon 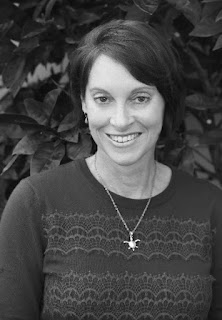 Suzanne was born in Perth Western Australia and as a young adult grew up in the small country town of Tom Price situated in the outback of Western Australia. Her current home is in Perth with her husband, two daughters and cat Abby.

Suzanne has a Bachelor of Science Degree, majoring in Sports Science. Her interests include watching movies, particularly sci- fi, travelling, photography and reading. She also enjoys going to the occasional comic book convention!

Like the young women in her stories, Suzanne has had the opportunity to experience many exciting adventures in her life so far including being part of the Australian Army Reserves, climbing to Mt Everest base camp, descending into one of the pyramids at Giza in Egypt, flying in a hot air balloon over the Valley of the Kings, parachuting from a plane at 12000 feet in York and sitting on the edge of an active volcano on Tanna island in Vanuatu.

Suzanne has won the award for best Sci fi/Horror in an e-book in the New Apple literary awards for her YA novel Seventeen and received a bronze medal from Reader' Favorite International writers’ literary competition for her children’s novel The Pirate Princess and the Golden Locket.

Suzanne is a member of the Society of Children’s Book Writers and Illustrators and the Australian Society of Authors.

Her published works include;

Seventeen, book one in the Seventeen Series. A YA dystopian adventure story set in Australia.

The Pirate Princess and the Golden Locket, a pirate adventure story for middle grade children

You can find Suzanne on Social Media:

For my stop I have my review, enjoy.

Rage by Suzanne Lowe
My rating: 3 of 5 stars

Book two in the exciting YA Seventeen Series set in the Australian outback.

“Revenge. It was all he could think about.
His body ached for it, burned for it like a relentless fire waiting to be quenched. It was all he wanted.”

With the KV17 virus now in its mutated form and the older children infected, they face an uncertain future.
As they attempt to find a cure, an old enemy unexpectedly returns, creating tension and turmoil throughout Jasper’s Bay. When hostilities increase, Lexi must face her fears and suppress the rage building inside her.

Will the virus take hold or can she maintain control? How can you defeat an enemy when it is part of who you are?

This is book two in a series, I haven't read book one and don't think it has impacted on me enjoying the story however I will be going back to read book one. Set in the outback in Austrailia, the KV17 virus which I assumed was the focus on book one, it taking off etc, all of the adults are dead from it and it has now mutated. Kids of seventeen and above are being affected by it but instead of being killed they are "changed" overcome by rage and emotions, how can they survive. They only know that which they have seen and experienced, some of their camp were removed when they become infected. As it becomes clear no one is safe some of the older kids have to try and reach out to those removed from their community, to see how they fared and if there is any hope. An old enemy from the previous book is still in their midst, the odds are against them, can the kids find a cure to stay safe, protect the younger ones and just survive?

So an apocalyptic type book, all adults are gone, it is set in modern day so all our kids are device reliant but what do you do when all of that is gone. Back to basics to try and survive, provide for themselves and live to see another day. Lexi is our main character, trying to battle with everything that passed, one of the kids that had to leave she was quite close to and her emotions are running high. Is it stress or because she is of an age she needs to worry about the virus?

There are a lot of themes to the book, survival obviously, friendship, relationships, finite resources and what happens when the need is more than there is to go around. Lexi has a lot of personal issues to contend with, her petulant sister, trying to keep everyone safe & active within their wee town, her own changes and what that could mean not just for her but her wee tribe.

I really want to go back and read book one to get a few gaps/questions filled in for me, I am really looking forward to book three due to how this one is rounded up. Apocalyptic with not too dark themes although there are some parts, at least one seen had me gasp out loud. In these types of situations, especially with no adults around, we can see the worst come out in people, actions and consequences! I am very much looking forward to the next in this series!


View all my reviews
Posted by So many books, so little time at 00:01