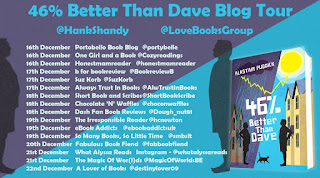 Today is my stop on the blog tour, I have content for my spot, please check out the other stops as we all over different content. 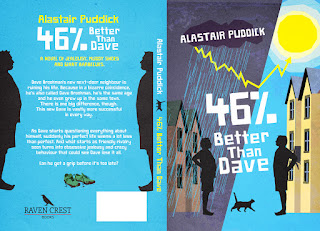 A novel of jealousy, muddy shoes and giant barbecues.

Dave Brookman’s new next-door neighbour is ruining his life. Because in a bizarre coincidence, he’s also called Dave Brookman, he’s the same age and he even grew up in the same town. There is one big difference, though. This new Dave is vastly more successful in every way.

As Dave starts questioning everything about himself, suddenly his perfect life seems a lot less than perfect. And what starts as friendly rivalry soon turns into obsessive jealousy and crazy behaviour that could see Dave lose it all. Can he get a grip before it’s too late? 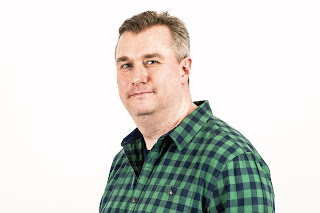 Alastair Puddick is a writer and editor who has spent the past 20 years writing for a variety of magazines and websites. His work has spanned many different paths, from jetting off to exciting cities across the world to writing about dating advice, data centres, facilities management and the exciting world of flooring. He also once wrote an agony advice column posing as Elvis Presley's ghost.

Alastair still works as a copywriter and lives in Sussex with his wife, Laura, and cat, George. He has written three novels: The Unexpected Vacation of George Thring, Killing Dylan and his newest book, 46% Better Than Dave.

Rude, curmudgeonly, crass and outrageous, Freddie Winters is my favourite character to write.

I love an antihero in fiction. People of questionable character, who live by a more complicated moral code. Those people brave enough to live life their own way, without apology. Not always living by society’s rules, or strictly within the law. But who still have a good heart and can be called upon to save the day – even if somewhat begrudgingly. Characters like Lisbeth Salander (The Girl with the Dragon Tattoo), Dexter Morgan (Darkly Dreaming Dexter), Allan Karlsson (The Hundred-Year-Old Man Who Climbed Out of the Window and Disappeared) or The Bookseller with No Name (Mystery Man).

When I first had the idea for Killing Dylan, I knew what story I wanted to tell – the central plot, the key crime and the motivation for doing it. I knew what was happening to whom, and why people were doing what they were doing. The very first draft I wrote was actually written from the point of the view of the titular character. But there was something missing. The story needed an extra edge.

I thought about how other crime books worked, with a dedicated detective, armed with years of experience and success, and a burning desire to uncover the truth. Then I thought, why not spin that on its head? Maybe the central protagonist, who had to solve the crime, could be someone with no experience, very little success, no real clue of what they’re doing and who doesn’t really want to be there in the first place. The idea made me smile, and my antihero, Freddie Winters, was born.

The wrong man for the job

Freddie was partly inspired by the TV show Castle, in which a very famous, successful mystery novelist joins up with the NYPD to enthusiastically solve crimes in his spare time (itself a kind of update of Murder She Wrote). However, rather than a successful novelist, Freddie is not very good (although he can’t see that). He just about manages to carve out a living writing books that nobody buys, and organising his own impromptu book signings. He hates that he isn’t more successful, when all of his peers have gone on to do so much better. He can’t pay his rent. He can barely afford to eat. And he hates the world for it.

Freddie is curmudgeonly and rude. He’s bold and outspoken. He can’t understand why people don’t see how brilliant he is. And his bad attitude often gets him into a lot of trouble.

Living life his own way

I always have a lot of fun writing Freddie Winters. He is completely incorrigible. He says things that he shouldn’t (that nobody should), and he doesn’t apologise for it. He does things his own way – even when that way offends or upsets people (or sometimes because of it), or even breaks a few laws. Despite that, his heart is firmly in the right place, and he can (almost) always be called upon to do the right thing – especially if there’s a bit of money in it for him.

I love how brave Freddie is (even though, technically, he’s a bit of a coward). He’s brash and confident. He doesn’t suffer fools and he’s not afraid to tell people what he really thinks. Most of all, he stands up for what he believes in. He stands up for his friends. And when push comes to shove, he’ll put himself in harm’s way to protect those people he loves.

A little bit of me

My wife has often said she thinks Freddie Winters is me, if I were brave enough to really say what’s on my mind. I guess there’s a little truth to that. Although the character is not autobiographical, there definitely is a little bit of me in him. Whenever you create a character, their experiences will always be based upon your own – even if you completely subvert things to create someone completely opposite to yourself. And, okay, I’ll admit some of the things Freddie moans about are the same things that get on my nerves, too.

That’s probably why I enjoy writing Freddie so much. I make him say the most outrageous things, have terrible opinions, act in a completely outlandish way and do really mean-spirited, ghastly things – the sort of things that make me gasp and laugh in equal measure. And hopefully they make other people laugh, too.

Freddie Winters is definitely my favourite character to write. So much so, in fact, that I’ve recently started work on his next adventure. I can’t wait to see what outrageous things he gets up to next, and book two in the Freddie Winters series should hopefully be with you soon. And in the meantime, why not check out my other books at alastairpuddick.com