Well as you will have seen from my previous posts I got my books and was delighted (and a bit nervous) to be taking part for the first time in the World Book Night. My books were Let The Right One In by John Ajvide Lindqvist.

My first book I gave to my friend who pretty much never ever reads and I was surprised how easily he agreed to give it a go. He says he will read it whilst traveling to England and I believe he is going to give it a bash. This is him below with his book (I had to get a picture to prove it actually happened!). 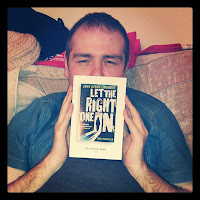 I then went into town with as many as I could carry (as I signed up saying I would take them into work and put one or two as a giveaway on here), and of course I had a few wary people say no thanks. To be fair how often do you get something for free with no conditions or payment attached so I understand people being wary. Anyway I passed them out to strangers and people where very grateful but it was a lovely wee old lady who made my day for me. At first she thought I was trying to sell her the book (she was hard of hearing) and when I explained it was free her voice quivered and she looked like she was going to cry and said she it had been a long time since anybody had given her anything that was free <3 - such a lovely wee lady. She then asked what it was about and I admitted I hadn't yet read it but it had a vampire in it to which she chuckled and said she hadn't had one of them before, thanked me and went on her way. Then if that wasn't enough I ran into another giver, I couldn't believe it I didn't expect to find anyone doing it in Glasgow or run into them as when I searched I couldn't find any events listed in Glasgow. Anyway I met the lovely Nicola B who was giving away a Roahl Dahl's Someone Like You. You can find Nicola on Twitter @robotnic and check out her lovely website http://www.unculturedcritic.com/

Would I do it again next year? In a heartbeat and I would take most if not all of my books into town and give them out there. Such a great way to introduce people to books or a new author and teach them about World Book Night as it is amazing how so many haven't heard about it!

The giveaway for this book ends tonight at midnight and I will pick and announce the winners tomorrow (giving a chance to any last minute late night stragglers).
Posted by So many books, so little time at 22:42