Today is my turn on the blog tour for Ashes by Christopher De Vinck, mine is the last stop on the tour, I have my review for my stop, enjoy. 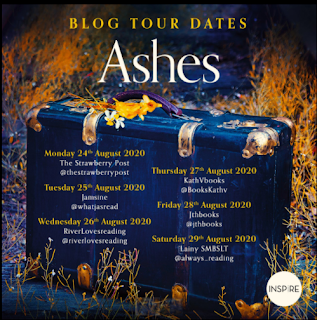 Ashes by Christopher de Vinck
My rating: 4 of 5 stars

A deeply touching novel about two young women whose differences, which once united them, will tear them apart forever, during Hitler’s Nazi occupation of Belgium and France. Based on true events.

For fans of All The Light We Cannot See and Tattooist of Auschwitz.

Belgium, July 1939: Simone Lyon is the daughter of a Belgium national hero, the famous General Joseph Lyon. Her best friend Hava Daniels, is the eldest daughter of a devout Jewish family. Despite growing up in different worlds, they are inseparable.

But when, in the spring of 1940, Nazi planes and tanks begin bombing Brussels, their resilience and strength are tested. Hava and Simone find themselves caught in the advancing onslaught and are forced to flee.

In an emotionally-charged race for survival, even the most harrowing horrors cannot break their bonds of love and friendship. The two teenage girls, will see their innocence fall, against the ugly backdrop of a war dictating that theirs was a friendship that should never have been.


I always said I wasn't into historical fiction, maybe it is an age thing but I have read a few in the last few years and really liked this. This one I struggled to put down. Simone Lyon and Hava are best friends, the year is 1939, we are just at the run up to the war before it all kicks off. Simone's dad is a legend for his services in world war one. Hava is of Jewish faith, Simone of Catholic faith - both living with their families in Belgium, their friendship is strong, they are young, innocent and carefree. The strong covers the time period immediately before the war, during and after.

Guys it is an emotive read, some of the scenes are very distressing, the brutality of war, the way people are murdered, mistreated and the actual bile and hate that was allowed to flourish, mass murder! At the start of the chapters, mostly, we have quotes taken from Hitler's speeches, the Nuremberg trials that have the hairs on your arms standing. I haven't read much on the wars but everyone of course knows of them and the Holocaust, reading some of the words preached by these "humans" it just beggars belief.

The beauty of this story is it focuses on two innocents, bonded by friendship and despite the many horrors/dangers facing them their friendship is whole, beautiful, strong and loyal. We follow the destruction of their lives as they know it, the constant danger as the war progresses. Laughs, friendship, horrors of war, love, family, loyalty - the book delves into it all and brings humanity to life, bouncing off the pages, in both heart warming moments and horror. The writing draws you into the girls lives, living the smiles and tears along with the girls, it is emotive! 4.5/5 for me this time, this is my first time reading this author, I would absolutely read his other works and plan to look him up.