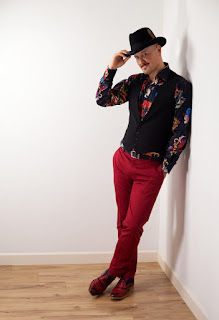 
• The book I hear is based on something you experienced yourself, is that true and if so what happened?

Yes, it’s true. Several years ago, I had a cyberstalker who made my life hell. It started with emails and trolling on Twitter, then spilled over onto various websites where I was employed as a journalist or featured as an author. It was mostly homophobic abuse. At its worst, I was receiving dozens of malicious communications every day. The stalker also contacted people who employed or supported me in some way, trying to persuade them to drop me. Then they started buying tickets for my events, posting the booking info on Twitter and making veiled threats to come and sort me out. Eventually I went to the police, who were very understanding. The scene in the book where Tom reports Evie to the police is pretty much as I remember it. I then helped the detective to build a case by taking screenshots of everything and making numerous police statements. Basically, you have to relive the abuse over and over again. Eventually the woman responsible was arrested and tried, found guilty and given a suspended sentence and a restraining order. I never heard from them again but the after effects of the harassment lasted for months.

With time and support - from my partner, my GP, friends and victim support. I had counselling and was also prescribed anti depressants. I wasn’t in a good way! I was very angry, not just with the woman responsible but also with myself for letting it get to me. Of course I realise now that I was wrong to feel that way. Harassment or stalking is seriously disruptive and unsettling. I was diagnosed with PTSD. I wanted to communicate some of that in the book. The impact of what happened to me still lingers, but in a more positive way. I changed my online behaviour. I’m far more discerning about what I share on social media now.

• How did you find writing the book when it is something so close to something you experienced?

It was very therapeutic. I often mine my own life experiences for my fiction, so I knew I’d write about it at some point. The idea for the book really seeded itself when I moved into crime fiction a few years ago. I knew it would make a good story. It was a story I had a specific insight into.

• The characters, well the main male and female, are not the nicest by any means how did you come up with them?

They’re partly based on various people or character types I’ve encountered over the years. I also put a bit of myself into each character I write - in this case, my less admirable qualities! I’m not really interested in nice characters. They’re not as much fun to write. I’m far more interested in characters who are compelling or damaged in some way. They’re more of a challenge.

• The female character, her voice was so authentic was that hard to create?

I found writing her the most enjoyable. I wanted the story to be more ambiguous than it was in real life, and for her character to be more sympathetic than the person who inspired her. Once I had her voice, writing her came quite easily. I’d hear her whispering in my head, sit down and write.

Evie, for lots of reasons. She’s clearly damaged, obsessive and relentless but also very witty and well read. Her pop cultural references were great fun to write, too - Morrissey, obviously, but also Blondie, Bowie and Madonna. I’ve interviewed Debbie Harry and I met David Bowie. I’ve gone off Morrissey but I’m still a big Madonna fan. She’s a great pop star. So Evie and I have a few things in common.

• What is next for Paul Burston?

I’m working on my next book. It’s another psychological thriller, also set in Hastings, and revolves around a man seeking revenge for things that happened to him in the past. It’s more of a family drama than the current book. I’m also touring with my literary salon Polari and preparing for our Polari Book Prize event with Tracey Thorn in October and our twelfth birthday event with Russell T Davies in November, both at the Southbank Centre.

• Where can fans find you? (dare I ask that after reading “The Closer I Get”

My website has information about upcoming author events and Polari events. www.paulburston.com

• Anything else you would like to add/answer that I haven’t asked?

I’d like to encourage your readers to please support local bookshops and libraries! They do so much for authors.

About the book, My Review, Blurb from Goodreads 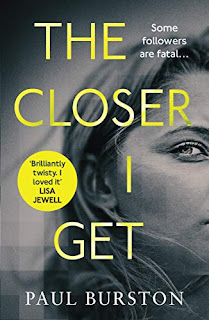 Tom is a successful author, but he’s struggling to finish his novel. His main distraction is an online admirer, Evie, who simply won’t leave him alone. Evie is smart, well read and unstable; she lives with her father and her social-media friendships are not only her escape, but everything she has. When she’s hit with a restraining order, her world is turned upside down, and Tom is free to live his life again, to concentrate on writing. But things aren’t really adding up. For Tom is distracted but also addicted to his online relationships, and when they take a darker, more menacing turn, he feels powerless to change things. Because maybe he needs Evie more than he’s letting on. A compulsive, disturbingly relevant, twisty and powerful psychological thriller, The Closer I Get is also a searing commentary on the fragility and insincerity of online relationships, and the danger that can lurk just one ‘like’ away…


And if I haven't spoiled you enough with the interview I have a wee giveaway of the book. x1 ebook, UK ONLY, sorry guys but Amazon doesn't allow me to gift outside my own country. To be in with a chance just fill in the Rafflecopter below, good luck.