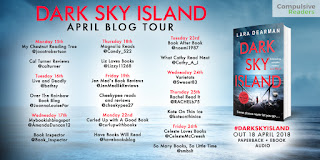 Today is my stop and closing the blog tour for Dark Sky Island by Lara Dearman, if you haven't checked out the other stops please do as we all offer different content.

Dark Sky Island by Lara Dearman
My rating: 4 of 5 stars

An inspector and journalist join forces to uncover long-buried secrets, simmering resentments, and a chilling murder in a tiny, remote island in the English Channel.

The tiny island of Sark lies isolated in the dark waters of the Channel Islands. No cars are allowed. No streetlamps light its paths. It is the world’s only Dark Sky Island. This breathtaking patch of land seems the picture of tranquility—but at its heart lies a web of murder, deceit, and hidden danger.

When bones are discovered on Derrible Bay and an elderly resident is violently murdered, DCI Michael Gilbert from the nearby island of Guernsey is called in to tackle the case. With his department under fire, he needs to find the killer—and fast. Joining him is newspaper reporter Jennifer Dorey, whose father died in a mysterious drowning off the island. As Michael struggles to crack the case and Jennifer launches her own investigation, the island’s residents are left reeling and soon, their dark secrets begin to unravel threatening everything.

On an island steeped in superstition, where tales of hauntings and devil craft abound, Michael and Jenny race to discover the truth in Dark Sky Island, the second tantalizing installment of Lara Dearman’s Jennifer Dorey mysteries.

Jennifer Dorey is a journalist who has a recent run of being on the other side of the story. Now she is heading back to the island, Sark, to cover a story - the discovery of bones in a cave. Really she is going back for personal reasons, the death of her father, Jenny has never believed it was an accident and now she has a reason for being back and doing a bit of digging. When an islander is brutally murdered Jenny will find she has maybe bitten off a bit more than she can chew as she finds the some things should remain in the past.

This story has a whole host of things going on, small island doesn't want outsiders, one of their own is murdered, unresolved family issues, secrets, lies, death looming around the corner. The reader goes on the journey with Jenny, slowly unravelling the secrets of the island and uncovering bigger issues.

The setting for the story, the authors creative flow, you can visualize it with ease and I so want to go visit, excluding all the issues and bad stuff obviously. There is a lot of history with this book and despite this being my first dance with this author and this being book two, I don't think I missed anything by starting with this one. I will be checking out the first story as I would like more history on the main character but got into the rhythm of this one no bother. It goes at a good pace and has a few layers to the story, atmospheric and keeps the reader on their toes as you may think you have it figured only to have another curve ball chucked at you. Enjoyed reading this author and will be looking out for their other offerings, 4/5 for me this time.