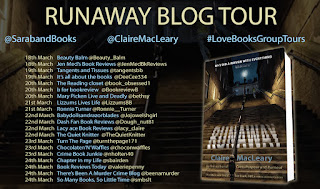 Today is my stop on the blog tour for Runaway by Claire MacLeary, I am closing the tour, if you missed the previous stops please check them out as we all offer different content, this is a #LoveBooksGroup tour. 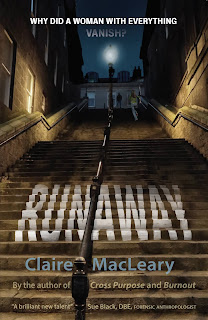 The third book in the awards-listed Harcus & Laird series

When Aberdeen housewife Debbie Milne abruptly vanishes without trace, leaving behind her two young children, husband Scott is too distraught to sit out the police's 72-hour window and await developments. He turns to local detective agency Harcus & Laird.

Put off by previous "domestic" cases, Maggie Laird isn't keen, but is cajoled by partner Wilma Harcus into a covert operation. Together they comb through meagre scraps of information, eventually trawling the city's women's refuges and homeless squats, in spite of the deadly danger.

Then a woman's body is discovered in a Dundee builder's skip. With the clock ticking and the police struggling to make identification, the race is on. Claire MacLeary fashions a surprising, gritty, fast-paced tale with the warmth and wisdom of ‘women of a certain age'.

For my stop I have the back story from the author, check it out and enjoy.

HARCUS & LAIRD - THE BACK STORY

When first I set out to write a crime novel, researching what was out there seemed the obvious place to start. Having read a wide range of British, Scandinavian, French and Italian thrillers, it appeared the protagonists fell into two main categories: hardened detectives and highly skilled forensic scientists. Tartan Noir, in the main, was populated by policemen with drink and/or relationship problems. Hugely successful though many of these books are, I determined my best hope of being published was to write something completely different.

What if I were to write a crime novel in which nobody was qualified in anything? The idea seeded in my head. As it began to grow, I combed my memory for a lead character. A woman, for sure, since women are underrepresented as protagonists. Where does this woman live, I asked myself? Not in the Central Belt, where many Scottish crime novels are set. Not in my (then) home town of St Andrews, which maintains a limited police presence. I settled for Aberdeen, where I'd lived for some years and which offers a wide range of sources on which to draw: a rich history, an ancient university, the North Sea, fishing, farming, oil.

What does she do for a living, this non-professional woman? Most likely work in a low-paid job and/or be stuck at home with her kids. So how does she become involved in crime? Since she has little knowledge of police procedure, far less forensics, she'll have to – somehow – become a private investigator. On her own? Unlikely? Perhaps she has a friend. Or a neighbour? And so came into being Maggie and Wilma, two ordinary women 'of a certain age', living in modest semi-detached bungalows in an Aberdeen suburb. They're women every reader can identify with.

Neither young nor especially pretty – Wilma's weight yo-yos, Maggie has a wall eye that knocks her confidence – they juggle part-time jobs with doing the household shop and stirring the mince. Menial tasks. But like many other women in the same situation, they have a deep well of inner resource they can draw on when needed: life skills, resilience, common sense. Thus armed, my unlikely PIs, Maggie and Wilma, set out to challenge authority and combat injustice. Two ordinary women doing extraordinary things.

There is even a happy ending. Sara Hunt, Saraband publisher extraordinaire, 'got' Maggie and Wilma at once. As did readers, longlisting Cross Purpose for the McIlvanney Prize for Best Scottish Crime Book 2017
Posted by So many books, so little time at 00:01