Today is my turn on the blog tour for Rogue Killer by Leigh Russell, a Random Things Tour. 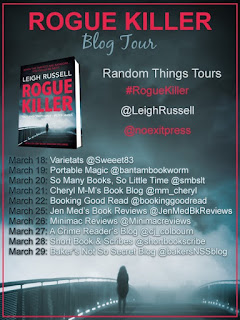 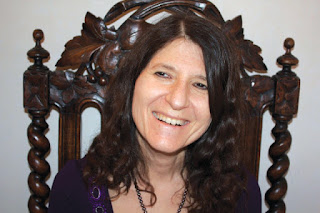 Leigh Russell is the author of the internationally bestselling Geraldine Steel series: Cut Short, Road Closed, Dead End, Death Bed, Stop Dead, Fatal Act, Killer Plan, Murder Ring, Deadly Alibi, Class Murder and Death Rope. The series has sold over a million copies worldwide. Cut Short was shortlisted for the Crime Writers Association (CWA) John Creasey New Blood Dagger Award, and Leigh has been longlisted for the CWA Dagger in the Library Award. Her books have been #1 on Amazon Kindle and iTunes with Stop Dead and Murder Ring selected as finalists for The People’s Book Prize. Leigh is chair of the CWA’s Debut Dagger Award judging panel and is a Royal Literary Fellow. Leigh studied at the University of Kent, gaining a Masters degree in English and American Literature. She is married with two daughters and a granddaughter, and lives in London. 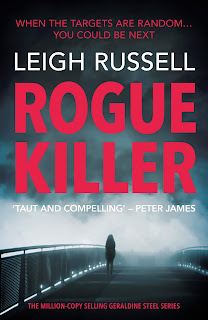 A man is killed in apparently random attack, and suspicion falls on a gang of muggers. Only Detective Sergeant Geraldine Steel thinks this is the work of a more deliberate murderer.

Two more victims are discovered, after further seemingly indiscriminate attacks. The muggers are tracked down, with tragic consequences. And all the while the killer remains at large. When Geraldine finally manages to track down a witness, she finds her own life is in danger...

For fans of Martina Cole, Mel Sherratt and LJ Ross

Out to buy from tomorrow, from AMAZON

For my stop I have a wee extract from Chapter one, you lucky things! Enjoy.

Striding home through the dark streets of York with a bloody plastic cape and rubber gloves concealed inside a polythene bag in his rucksack, he congratulated himself on a successful outing. He had come a long way since leaving the house where he had spent his unhappy childhood. He had done his best, but even then he had known that the cats he killed had been paving the way for other victims. At that time he had been forced to suffocate his victims, as he couldn’t return home covered in blood. Because the most annoying aspect of his life back then was that whenever he flung himself through the front door, bag on his back and blond fringe flopping over his forehead, his parents would be there, waiting…

He turned away from his parents, refusing to look at them, certain they would crush his excitement. Glancing up, he gave a defiant smile at his father’s reflection frowning at him in the mirror. If they persisted in worrying about him when he stayed out late, that was their problem. It wasn’t fair of them to spoil his fun.

He had given up insisting that it was his life to live as he pleased. Instead he had resolved to ignore them. In any case, they didn’t know the half of it. He took risks they knew nothing about. But the pay-off was worth all the preparation. His parents would never understand. No one would. In their smallminded way, people like them would assume he was driven by a sordid sexual urge, but nothing could be further from the truth. More intense than anything they could imagine, his pleasure was momentous; he had learned to exercise power over life itself. Compared to the triumph of a kill, all other experiences were petty.

Despite all their questions, he never told them where he was going or who he was seeing. For a long time he had simply told them he was meeting his ‘mates’. They didn’t need to know more than that. ‘Have you any idea what time it is?’ his father asked severely. When he didn’t answer, his mother spoke, her voice shrill with anxiety. ‘You know it’s nearly two o’clock. Where have you been? One night you’re going to get yourself in trouble. You could be attacked, and left for dead in a gutter, and we’d know nothing about it until the police knocked on the door to tell us you’d been killed. You have to come home at a sensible time. You’ll be the death of us with all this staying out late. We need to get to bed –’ ‘Oh, give it a rest, will you? If you want to go to bed, who’s stopping you? Did I ask you to wait up for me? What’s your problem? Nothing’s going to happen to me.’ Even though he was not quite sixteen, he hated the way they made him sound like a petulant teenager. He was so much more than that: a master of life and death. ‘You can’t say that,’ she replied.

‘Well, I just did.’ ‘Don’t be flippant with us, son,’ his father snapped. ‘The point is, however independent you think you are, you don’t know what might happen to you. No one does. A youngster like you, out on the streets on your own, you’ve no idea who might be out there, and what they might be after. People get assaulted, and young boys are especially vulnerable.’ They had been through the argument many times without reaching a resolution, but his parents refused to give up.

Forcing a smile, his father said, ‘Why don’t you at least let me come and pick you up, when you want to stay out late?’ ‘You’re having a laugh. You? Come and pick me up? Not bloody likely. You’d spoil everything.’ ‘Well, I could come and meet you somewhere then, if you like. Jesus, you must know you’re putting yourself at risk going out on your own at night. You’re only fifteen, and you don’t know anything of the world yet. Why don’t you at least tell me where you are, so I can come and give you a lift home? For your mother’s sake, if nothing else. You know she worries about you being mugged.’ ‘What if one of these muggers you’re so worried about attacked you?’ He spat the words out. He wasn’t laughing now. ‘You’re just as likely to be mugged as me, you know. Now, stop pestering me, because I told you nothing’s going to happen. Not to me, anyway.’ He turned away to hang up his coat. ‘I know what you’re trying to do,’ he resumed, turning back to face them. ‘It’s not going to work. You don’t own me. I’m not a child. You can’t control me anymore.’ Seeing his father cower backwards when he lifted his hand to pull off his scarf, he grinned, his good humour restored.

‘You thought I was going to hit you just then! You did, didn’t you? And you think you can scare me! Ha!’ He snapped his fingers in the air with a faint click. His mother stepped forward, one hand raised, but he stood his ground, taunting her. ‘What are you going to do? Hit me? That’s why you go on and on and on about something happening to me, because that’s what you want, to see me punished. You’d like me to suffer, just to prove you were right.’ ‘Don’t talk such nonsense. You know that’s not true.’ ‘Isn’t it?’ He held out his arm to display a series of scratches. ‘What’s this then?’ His father shook his head in disgust. ‘You know perfectly well you told us a cat scratched you. Now, I’ll ask you again, where have you been all this time?’ ‘Oh, give it a rest, old man. Have you got any idea how stupid you sound, asking the same questions, over and over again?’

With a flick of his head he tossed their sour protests aside and his long fringe spun around his head. He stroked it into place with the flat of his hand, enjoying the feel of its sleek softness. Until he was old enough to do as he pleased, his parents had never allowed him to grow his hair long enough to cover his ears. That was just one of many reasons why he hated them. As though it should be up to them to control his appearance! Now they had lost their authority over him, they were nothing in his eyes. Less than nothing. He understood their efforts to confine him were driven by anxiety, but he was different from them. He was fearless. Ordinary people like his parents could have no idea what he was capable of achieving. They didn’t know him at all. No one did. They were never going to understand that there was no need to be concerned on his account. They should be worrying about their own safety while he was living under their roof.