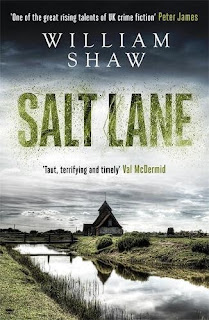 Today is my stop on the blog tour for Salt Lane by William Shaw. William very kindly took time out to do a Q&A with me, enjoy.


What was the inspiration for Salt Lane?

God. You see, I’m supposed to be selling the book here, but now I’m going to give a very serious answer which will put everyone off reading it. It was those first stories that came through after the Brexit vote about fruit rotting on the trees because farmers couldn’t get enough labour. If I was a farmer I would hate to see that happen. The temptation to start bending employment law would be massive, wouldn’t it? Whatever people’s thoughts on immigration, the fact is that some people will come to the UK legally or illegally to get work wherever they can find it. If you make them illegal then there are consequences. As we found out during the Prohibition in the 1920s, a prohibition creates crime. In the same way, immigration law creates crime; it’s unavoidable. So I wanted to write about what might happen…


Relationships seem to be a big focus in the story, mother and daughter (x2), work relationships/dynamics, was this important for you and why?

I think with crime series, you get into them because of a murder, but you stay with them because of the unfolding relationships. It’s what I like in series. The days when Mrs Marple is the same in each book, and returns to an eternal world in which nothing changes are gone.


There seems to be a lot going on with Cupidi’s daughter and I have unanswered questions, was this deliberate and will we have answers?

Honestly I don’t know!! To me – from personal experience – that’s what it feels like. When my daughter was a teenager my life seemed to be FULL of unanswered questions. Like, when are you coming home tonight and have you done your homework? So yes, she has problems, but I like her a lot.


Which may answer this question, Will there be more in the series?


Migrants/asylum seekers and their working conditions is important in the story (and in real life) how much research did you have to do and did you find it hard to write?

I did a lot of talking to people, including immigration lawyers, a journalist Hsaio-Hung Pai who’d gone undercover as amongst illegal migrant workers and she put me onto a charity that works with East European migrant workers. They all had great insights. There are also a lot of shocking first-hand accounts of illegal migrants trying to survive in the UK. I did find it hard to write though… just because there are people who are really going through a lot of very hard times in those communities.

I think of Salt Lane as the first book in a series. The Birdwatcher kind of created the world for Cupidi to move into, I hope, but I think you should be able to read this one without having to go back to it. That’s said, I’d be thrilled if you do.


You have a few series, do you have one you preferred writing over the other and if so why?

I also write the Breen and Tozer series set in 1968-69. I love doing the research for that one. It usually involves watching groovy movies and listening to old records. I haven’t yet developed a preference for one of the other but right now I’m loving making up Alexandra Cupidi.


What are you working on now?

The second book in the Cupidi series. The one with the severed arm, the delinquent teenagers and the massive money laundering scheme. I want the third book to be about wildlife crime – I think. I want to do something involving a Chris Packham-type figure getting into deep deep trouble.


Anything else you would like to add that I haven’t asked?

I’ve been doing a podcast called The Book Group, in which I travel round meeting people who are in reading clubs and find out what they’ve been liking. It’s been on hold while I’m finishing Cupidi book #2 but if you’re in a book group and interested in taking part, drop me a line via the contact form on my website. And thanks for having me,


Below is my review for Salt Lane.

Salt Lane by William Shaw
My rating: 3 of 5 stars

No-one knew their names, the bodies found in the water. There are people here, in plain sight, that no-one ever notices at all.

DS Alexandra Cupidi has done it again. She should have learnt to keep her big mouth shut, after the scandal that sent her packing - resentful teenager in tow - from the London Met to the lonely Kent coastline. Even murder looks different in this landscape of fens, ditches and stark beaches, shadowed by the towers of Dungeness power station. Murder looks a lot less pretty.

The man drowned in the slurry pit had been herded there like an animal. He was North African, like many of the fruit pickers that work the fields. The more Cupidi discovers, the more she wants to ask - but these people are suspicious of questions.

It will take an understanding of this strange place - its old ways and new crimes - to uncover the dark conspiracy behind the murder. Cupidi is not afraid to travel that road. But she should be. She should, by now, have learnt.

Salt Lane is the first in the new DS Alexandra Cupidi series. With his trademark characterisation and flair for social commentary, William Shaw has crafted a crime novel for our time that grips you, mind and heart.

This is book two featuring DS Alexandra Cupidi although you can read this as a standalone, however I really enjoyed The Birdwatcher and you get insight into the characters. Whilst you can get away with starting here I would suggest reading The Birdwatcher, it is a great book and gives you more info on some of the characters. A migrant worker is found murdered, a son's mother appears from nowhere and almost as quickly disappears again. This is Cupidi's chance to prove herself, after having left in scandal her last post and bringing her daughter with her she has a lot to prove. To her team, her daughter and herself but as with life when you are dealing with one aspect of your life others creep in. Her affair haunts her, her strained relationship with her mother, something isn't right with her daughter and now bodies are turning up brutally murdered, she has a lot on her plate.

I do enjoy how Shaw writes, you slide into the characters lives quickly and Cupidi has more going on than a soap opera. I really want more insight into her relationship issues with her mother, I need to know what is the chat with her daughter. I would love to hear again from a character who was in The Birdwatcher and whilst he doesn't appear in this book her colleagues are still reeling from what happened and it impacts on her relationships with them. I love that we have strong females characters that are human, have flaws but still manage to hold their own and aren't swooning at a man's feet which we see in abundance in many books these days.

This is a great start to a new series (or book two depending on what way you look at it), I think the foundations are strong and look forward to the next. I need answers to my questions, I want to see how Cupidi and her daughter get on and where Cupidi's career takes her next. She is a bit of an impulsive character but she also has a heart which I think makes for a great character, someone readers can warm to. There is a lot of focus on the investigation so you don't get bored with the relationship side of the story if that isn't your thing. I think the book offers something for everyone, police procedure, family angst, murder and intrigue. 3.5 out of 5 for me this time, not only am I looking forward to the next (I hope there is another in the series) I am going to check out his other series! 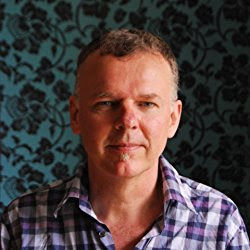 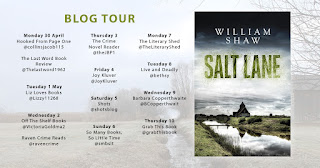