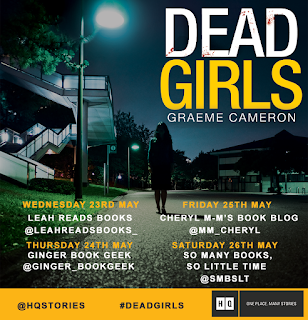 Dead Girls by Graeme Cameron
My rating: 3 of 5 stars

I may not remember everything, but I know he won’t hurt anyone else.

It’s been two months since a serial killer brutally attacked police detective Alisha Green and left her for dead. Two months since she could effortlessly recall simple things, since her mind felt remotely sound. The nameless killer thinks he knows her, thinks she’s just another dead girl among many. Ali Green plans to show him he’s dead wrong about that.

Ali has two enemies now: the dangerous man she’s hunting and her own failing memory. As explosive new evidence comes to light and conflicting accounts from a witness and a surviving victim threaten both her investigation and her credibility, she begins to question what is and isn’t real. And now Ali has no choice but to remember the past…before it buries her.

A hypnotically gripping thriller that proves internationally bestselling author Graeme Cameron is one of the most unique voices in contemporary fiction today.

Absolutely I recommend reading Normal by this author before reading this one, I read it a while back and feel like I want to re read it. DS Ali Green survived her encounter with "The man" the horrific serial killer from Normal and now we are following the police investigation and the after math of all that transpired from the first book. Normal was all about him, his activities, perspective, killings. This book is the police, primarily Ali, the pursuit and the ripples he has left from their encounter. Ali is determined he will harm no one else but how do you do your job, stay safe and keep the team going when you had a horrific injury and your memory is impaired?


It took me a wee bit to settle into this one, it kicks off with a bang and you are draw in quickly. However, there are a lot of characters and the scenes jump around a bit so it takes a wee bit to get your head round. Narration flips from first to third person, multiple characters and settlings and you have to be switched on to keep track. I think it adds to the weight of what Ali is going through, her memory is impaired, she has to keep notes and she is desperate to keep it hidden from her colleagues.

The devastation of this killer is clear from the beginning, he isn't featured much at all but his reach and actions have long lasting consequences. It is a unique story from that point of view, we see exactly how many lives a murderer can impact and the aftermath that follows. What I did really like was some of the subtle genius within Cameron's scenes. For example, what one character did when another finally left, nothing massive or huge but it encapsulates the reality of humanity. For some writers they can describe a place so well you can smell and see it, similar idea here but it is more some of the actions and responses a person does that just screams reality. It isn't a huge thing and some readers may pass over but I think small sparks like that are testament to creative genius. 3.5 out of 5 for me this time, I would like to see a prequel with more info on him and how he came to be, fingers crossed!