Welcome to my stop on the blog tour for Class Murder by Leigh Russell (an author who has fabulous taste in colours, her favourite colour also happens to be mine, purple!). 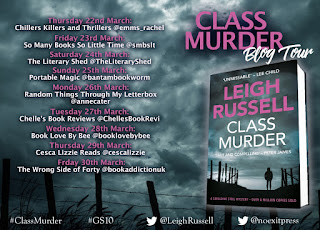 Class Murder by Leigh Russell
My rating: 4 of 5 stars

With so many potential victims to choose from, there would be many deaths. He was spoiled for choice, really, but he was determined to take his time and select his targets carefully. Only by controlling his feelings could he maintain his success. He smiled to himself. If he was clever, he would never have to stop. And he was clever. He was very clever. Far too clever to be caught.
Geraldine Steel is back for her tenth case. Reunited in York with her former sergeant, Ian Peterson, she discovers that her tendency to bend the rules has consequences. The tables have turned, and now he's the boss.

When two people are murdered, their only connection lies buried in the past. As police search for the elusive killer, another body is discovered. Pursuing her first investigation in York, Geraldine Steel struggles to solve the confusing case. How can she expose the killer, and rescue her shattered reputation, when all the witnesses are being murdered?

This is the 10th book in the Geraldine Steel series, I have picked some of the previous book sup out of reading order however I advise starting at the beginning. There is so much history that is relevant to this book I think to enhance enjoyment of the book I would definitely go back to the beginning.

Geraldine finds herself trying to settle after relocating in York, happy to be reunited with fellow officer Ian Peterson, now her superior, there are mixed emotions. Geraldine's private life has in recent times proven to be challenging, having a knock on effect on her job and she is trying to deal with that, new living arrangements, changes at work and now a vicious killer is on the loose.

We open to the killer as a child and flip around in modern day with the police investigation, insights from the killer and the victims. The police need a link, they need a motive and maybe then they can get a break on the case. Some aspects of the book are frustrating from the police point of view and what they come up against with the people they are investigating. I guess that is a true representative of what some of the force come up against in any investigation, let alone one so serious.

I said in my review of book 9, the family side of the story really hit me from an emotional stance, this book, whilst is does refer to family, the drive is more on the killer, victims, police investigation side f things. I always mention this with Russell's book but I love the Acronym glossary she uses at the front of a book. How many times do we read acronyms and forget what they mean and you are back tracking on the pages to find what they mean. May not be a big thing to some but I love it. Class murder itself is a riveting story, pulling the reader in from page one, 4/5 stars for me this time. I really need to go back and buy the couple of books I missed from this series! Have read more than a handful of Russell's work I can say, hand on heart, she is going from strength to strength and I cannot wait to read what is next for Geraldine Steel.