As you all know, I don't usually host blog tours, take part or do many Q&A with authors. Mandasue Heller has a new book out, released yesterday the 15th of August. As a result I agreed to participate in a Q&A with the author as part of this blog tour, there will also be a few copies of the book available for competition however I am awaiting confirmation of the number of novels from the publicist so keep your eyes peeled for that. 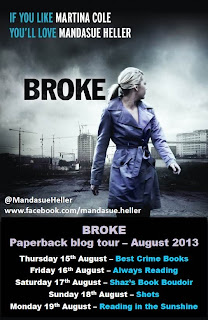 Q: You have a new book out in paperback, this is your chance to plug it, tell us all about it.
BROKE is about a couple who married far too young and are finding it difficult to cope with the reality of trying to bring up two small children on a low wage. When the hubby loses his job as a result of his gambling addiction, things go from bad to worse, and his wife’s life is turned upside down when he gets into debt with a particularly nasty loan shark. An actor friend of mine recently likened it to a modern-day Cathy Come Home, which blew me away, as I love that book!

Q: What inspired your new book?
I’m not sure, to be honest; I just get ideas and run with them. Sometimes, they come from things that have actually happened to me – Forget Me Not, for example; that came into being after I decided to write about an incident when, at the age of 9, I was assaulted by a man who caught me smoking in the park. I completely took myself out of it after I started to write the book properly, so it has no basis in reality, but that’s where it originated from.

Q: What do you choose the genre you do?
I’ve either witnessed or experienced similar situations to those that I tackle in my books, and so have a deep personal understanding of the world my characters inhabit.

Q: Would you ever try your hand to something different and if yes what?
I once tried a Mills & Boon type thing, but was so bored by page 6 I wanted to push both of my lead characters under the train they had met on! I have tried a few different things, but they inevitably get dark as they go on, no matter how light I intended for them to be, so I guess I’m meant to stick to this genre.

Q: Who is your favourite author to read?
I don’t really have much time to read these days, but I do love a good Martina, Kimberley, or Stephen King. In my younger days I was a huge Catherine Cookson fan. She was the original grit-lit author, and I loved her portrayals of ordinary folk struggling against the odds, so I was flattered when my mum recently compared Broke to her style of books.

Q: How do you find your research, do you do it alone or with a team?
I rarely research as I prefer to use my imagination, and I always steer clear of going into too much technical detail, because it can really interrupt the flow of the story. Too much info about police methods, etc, bores the pants off me, so I would hate to inflict anything like that on my readers. That said, in my latest book, Respect, I needed verification that something I had written about a particular job was correct, so I googled local firms specialising in it and rang one of them to ask. I was right in what I’d written, but the girl I spoke with gave me more information which proved very helpful.

Q: Do you think you will ever tour in Scotland?
I don’t have any immediate plans to tour anywhere at the moment, but I would never say never.

Q: Would you ever do a reality show and if so which one?
I doubt it, as I really don’t like being away from home for too long. The only thing I could ever imagine doing along those lines would probably be something like Come Dine With Me, because I can actually cook and love catering to friends and family – although I’m not sure how people who aren’t used to it would react to my somewhat spicy food! As for something like Get Me Out Of Here, or Big Brother – Never!!!

Q: Finally, out of all your books which is your favourite and why?

That’s a tough one. They’re all special to me, because they all came from my heart and possessed me completely while I was writing them, but Forget Me Not is particularly special - for the reason I mentioned earlier. It’s probably easier to say which characters are my favourites, rather than which book. I loved Harry in Tainted Lives, and Vibes and Jenna in The Club. And I’m really fond of Chantelle and Anton: the lead characters in my new book, Respect. Broke by Mandasue Heller is published in paperback on 15th August by Hodder & Stoughton, £6.99. 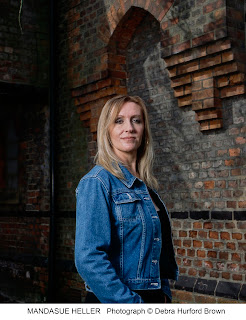