ARC - The Keeper by Luke Delaney

I am uploading my image of the book as my copy has a different cover from that showing on Goodreads. 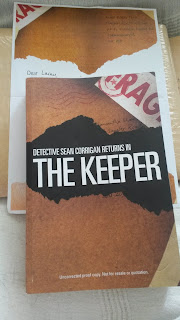 The Keeper by Luke Delaney
My rating: 4 of 5 stars

They tried to keep them apart, but when he finds her, he’s going to keep her. Just like he knows she wants him to.

DI Sean Corrigan is not like other detectives. His dark past has given him the ability to step into a crime scene and see it through the offender’s eyes. He understands what drives a person to commit terrible acts – but sometimes his gift feels more like a curse.

When women start disappearing from their homes in broad daylight, Corrigan’s Murder Investigation Team is reluctant to take on a missing persons case. But then the first body turns up, and Corrigan knows he must quickly get into the mind of the murderer. Because this killer knows exactly who he wants. And he won’t stop until he finds her.

I read the first book in the series, I hope this is a series with more to come, this is book two, of DI Sean Corrigan's career and investigations. Sean has an ability that helps him read crime scenes and understand criminals in a way that no other officer could or even quite understand. This book sees us follow Corrigan trying to peace together the disappearance of women, from their own homes by a madman who will stop at nothing to get exactly what he needs. When a body shows up and another female is missing, the police have to acknowledge this isn't going to stop until they catch him.

Ah it isn't often I like a second book more than the first one but this is the case this time. Don't get me wrong I did like the first book but this one just had something a bit more than the last one. Possibly because, I feel, it is a psychological thriller. It still is all crime, graphic descriptions and pulls you in however this time, our psychopath uses a method that, even now after finishing another book, it still is with me. The story kicks off with our psycho, Thomas Keller, in his uniform, about to make his grab. Right from the first page I was hooked as how often do you confidently open your door, without thinking twice, to a man in a uniform. It is the thought of how easy it could actually happen, despite it being a fiction book. The chapters go between Sean & Thomas and what is happening, how Thomas is progressing, thinking and what he is doing and with the women. Then to Sean going through his paces and concluding they have a case before they have a body.

Some of the scenes, especially with Thomas and his victims are very graphic and brutal and not for those easily upset or offended. DI Corrigan is brilliant again with his 6th sense on picking up vital information via the crime scenes and bread crumbs left behind. I would recommend anyone reading this to get Cold killing first as that explains how Sean has this "sense" and I think you would definitely enjoy this book more knowing the background.

We also reacquaint with Detective Sergent Sally Jones in this follow up book and how she is since all of the dramas and incidents in the first book, sorry no spoilers here. How she is coping back at work, her health and overall attitude towards 'perps', victims and her role as an officer.

I honestly hope this is just the beginning of a very long series as I will be following DI Corrigan's progress in any following novels. He is very much like the character Edward Norton plays in red dragon, especially with this sense of the killer and the killers motives. Had work not got in the way I could have seen me getting through this is a day, which considering it is 457 pages and a largish sized book says a lot I feel. An author who is progressing in his writing and coming along grand, I eagerly await the next installment. 4/5 for me this time, thanks so much to Harper Collins & the Killer Reads Team for sending me this ARC. Available to buy from the 29th of August from all good retailers.

View all my reviews
Posted by So many books, so little time at 19:17