Countdown to a Killing by Tom Vaughan MacAulay Blog Tour 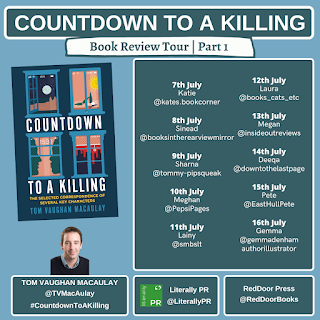 Welcome to my stop on the blog tour for Countdown To A Killing by author Tom Vaughan MacAulay. 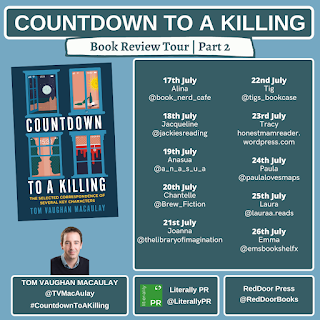 As you can see it is a big tour and we all offer different content, please check the other stops out. For my stop I have my non spoiler review, enjoy. 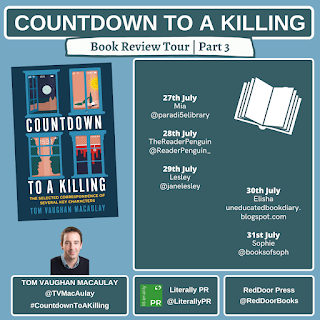 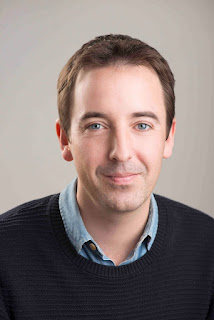 Tom Vaughan MacAulay is a solicitor and lives and works in London. His first novel, Being Simon Haines, was published in 2017 to high critical acclaim. The novel was selected as a Best Book for Summer by Alex Wade, writing in The Times, Law, while Justin Warshaw, writing in The Times Literary Supplement, described it as “a grand narrative of a young man on the cusp of the realisation of a dream.” Edward Fennell, writing in The Times, the Brief premium, asked whether it would become “the defining no vel for [Tom’s] generation about what it means to be a driven corporate lawyer. 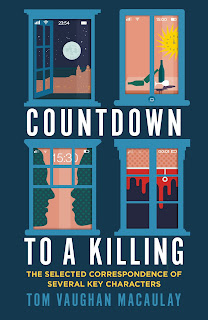 For my stop I have my review, non spoiler as always.

Countdown To A Killing by Tom Vaughan MacAulay
My rating: 3 of 5 stars

Time taken to read - in and out over 4 days

London, Sicily, Huddersfield 2016–2017: Wen Li is a deeply kind and sensitive twenty-nine-old British-Chinese woman who suffers from severe Obsessive Compulsive Disorder, which manifests itself in an incessant, overwhelming fear that she might have murderous impulses. Unlucky in love and emotionally scarred, Wen falls for colleague, Lomax Clipper, a tremendously frustrated and delusional Englishman. He’s in love with a Sicilian young woman he met while working in Italy, but he and Wen do share a mutual loathing of their boss, Julian Ponsonby. Julian’s struggling too – with a toxic relationship and his father’s refusal to accept his sexuality. On his return to Sicily, via a sabbatical, Lomax befriends Fifi de Angelis, a vulnerable Sicilian man with restricted growth who has been ostracised by his family.

An original concept, this is an innovative novel in literary fiction told through interwoven correspondence, emails and WhatsApp messages, with the suspense around an impending murder steadily building, Countdown to a Killing is a deep exploration of multiple perspectives and points of view of individuals who are inextricably bound. The key themes of love, sexuality, ethnicity, mental health and acceptance are sensitively explored in a unique linear year multi-layered and metafictional narrative. Packed with humour, heartache and a cast of expertly-crafted characters, this contemporary take on the epistolary novel will have you laughing and crying in equal measure.

So this is a bit of a different book, written in excerpts type format, in the form of WhatsApp, messages, email/letter type correspondence - one sided dependent on which character we are following. Wen Li for example is one of the characters who uses WhatsApp to correspond with a friend and family, despite being one-sided through her replies/follow ups we get the conversation content just fine. She starts a new job whilst getting to grips with her mental health and meeting/introducing the other characters into the story.

My concentration levels are pretty bad just now, caring 24/7 for a loved one so demands and stress levels are high. I think whilst the format is quite different and may take some readers time to settle, if you are distracted and struggling to either get stuck into a book or have time to read this one offers relief from that. Some entries are short and snappy and we go between the characters who are linked to one another via work then relationships established.

Lomax is a writer, desperate to finish and publish his first book, he is a bit of a riot, ideas of grandeur and very sure of himself and his book/writing. Wen Li meets him at her new job and finds herself attracted to him but things are never quite straight forward, Lomax is very self involved and all consumed with his book. Julian is their box, clashes with Lomax and has a very volatile relationship with his partner who has addictions and his father who has issues with Julian's sexuality.

The book has a plethora of themes/issues, sexuality, mental health, identity, social acceptance, disabilities, delusions, friendship, betrayals and that is just scratching the surface. Multiple view points and narration but also different formats which you think would be distracting but as I said despite finding it difficult to concentrate lately this book gave me the opportunity and freedom to dip in and out as life allowed. It did take me a little time to settle and get a feel for the characters but once I did I was set.