Dead in the Water by Mark Ellis Blog Tour

Today is my stop on the blog tour for book Dead in the Water by Mark Ellis, for my stop I have my review. 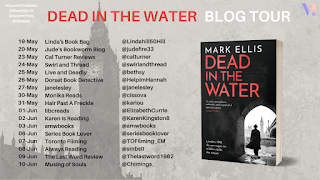 Dead In The Water by Mark Ellis
My rating: 4 of 5 stars

Time taken to read - in and out over 6 days

Summer, 1942.
The Second World War rages on but Britain now faces the Nazi threat with America at its side.

In a bombed-out London swarming with gangsters and spies, DCI Frank Merlin continues his battle against rampant wartime crime. A mangled body is found in the Thames just as some items of priceless art go mysteriously missing. What sinister connection links the two?

Merlin and his team follow a twisting trail of secrets and lies as they investigate a baffling and deadly puzzle .

This is book five in a series but my first introduction to both the author and the series. Set in world war 2, 1942, excluding the prologue. The opening is a rather uncomfortable transportation into an interaction with Nazi soldiers doing what they did back then to a wealthy Jewish family. Drawn immediately into the horrors of war and that time period.

The book branches into different story lines so it takes a little to settle to but once you get into it and further along you appreciate the interlinks. DCI Frank Merlin is a good guy, doesn't like to see a wrong go by and not be addressed even if it means ruffling some feathers. Investigating a murder, a body pulled from the water, American soldiers in London, issues with thefts, war is raging, fighting amongst the ranks, family troubles and artworks for sale for millions but it is stolen property?

A historical fiction that has a lot going on and keeps you intrigued. One of the plots takes you into a family & their dynamics, spoiled rich adult brother and sister who rely heavily on their father for money and just brats. Taking you out of the war and reminding you that whilst atrocities were ongoing for some life went a little less painful whilst the biggest hang up being money, their business ventures. Racial issues that makes for uncomfortable reading and people trying to do what is right whilst others actively block them regardless of what is at stake.

I have to admit to being a bit ignorant to knowing the a lot of the history but when I read books like this I tend to read up on some of the bits mentioned. Then I want to read up factual books and I think when a book peaks your interest like that the author has done a good job. Whilst I have came late to the series I do really like Merlin and what that he stands up for what is right, I need to catch up with the previous books, 4/5 for me this time.

View all my reviews
Posted by So many books, so little time at 00:00