Today is my stop on the blog tour for London In Black, for my stop I have my non spoiler review. 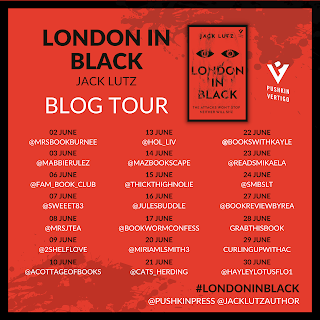 London in Black by Jack Lutz
My rating: 3 of 5 stars

A tense ticking-bomb suspense thriller for fans of high-concept dystopian fiction such as Hanna Jameson THE LAST or Lauren Beukes' AFTERLAND.

THE ATTACKS WON'T STOP. NEITHER WILL SHE.

LONDON 2029. Copy-cat attacks plague the city. DI Lucy Stone, a guilt-ridden Vulnerable, is called to investigate a gruesome murder of a scientist, who might have held the key to an antidote. But is the antidote real?

And can Lucy solve the case before her Boosts stop working, leaving her defenceless once again?

So Di Lucy Stone is a survivor from an attack in London 2027, the time now is 2029. Lucy like other survivors needs to inject herself to keep her levels up as her body has been left "vulnerable" - some are visibly marked after the terror attack, many died. We hear about it back and forth between timelines. Now there has been a murder, someone who worked hard to help the vulnerable, is this what motivated the killing? Lucy investigates the case with her new colleague, fighting against her condition and religious zealots.

So I struggled a bit to start with as Lucy, I get she is/has this horrific after effect and survivor guilt and references to this debt she feels she has and something that happened in her past. She is a DCI though and acts like a hormonal teenager, smashing up an office, deliberately manipulating her superior although maybe this was to highlight the issues with the exposure she had, the survivor guilt as the boss cuts her a lot of slack.

I did find her ability to recognise faces interesting and would have loved more use of that and references. Another thing was the constant reference to her tugging on her hoodie strings, do DCI's actually wear casuals like that? Fair enough if so I just wasn't sure of it nor the often reference to her tugging on it, maybe meant to highlight her twitchiness and repetition as a comfort measure. After five times though it just felt it wasn't needed.

I think the attacks were really interesting and would have liked the story to explore more of it as more attacks happen, religious movements come after (how often do we hear a tragedy being held against survivors and attributed to God(s).

There was a lot going on so you are kept interested in the story but some of it was quite distracting, her constant thoughts to what she perceives as her debt. We know she has guilty feelings over someone but it hints and for me dragged out.

The characters I can't say I loved any of them and when I thought something was maybe happening with one or two and hinted at it kind of fell a bit flat. Lots of swearing, police procedural as we follow Lucy and co trying to find a motive and the actual killer.

Like I say interesting enough but I would have liked a bit more on the terror attacks, the people behind it, the other vulnerables, why was Lucy so different? I would have liked more depth to the characters but if this is book one in a series (not sure it is) it is a good foundation for the series, this is a debut.