Thunder on the Moor by Andrea Matthews Blog Tour 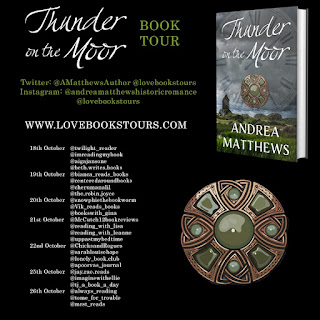 Today is my turn on the blog tour for the final stop for book, Thunder on the Moor by Andrea Matthews.

Author Bio Andrea Matthews is the pseudonym for Inez Foster, a historian and librarian who loves to read and write and search around for her roots, genealogical speaking. She has a BA in History and an MLS in Library Science, and enjoys the research almost as much as she does writing the story. In fact, many of her ideas come to her while doing casual research or digging into her family history. She is the author of the Thunder on the Moor series set on the 16th century Anglo-Scottish Border, and the Cross of Ciaran series, where a fifteen hundred year old Celt finds himself in the twentieth century. Andrea is a member of the Romance Writers of America.

For my stop I have my review, enjoy.

Thunder On The Moor by Andrea Matthews
My rating: 4 of 5 stars

Maggie Armstrong grew up enchanted by her father’s tales of blood feuds and border raids. In fact, she could have easily fallen for the man portrayed in one particular image in his portrait collection. Yet when her father reveals he was himself an infamous Border reiver, she finds it a bit far-fetched—to say the least—especially when he announces his plans to return to his sixteenth century Scottish home with her in tow.

Suspecting it’s just his way of getting her to accompany him on yet another archaeological dig, Maggie agrees to the expedition, only to find herself transported four hundred and fifty years into the past. Though a bit disoriented at first, she discovers her father’s world to be every bit as exciting as his stories, particularly when she’s introduced to Ian Rutherford, the charming son of a neighboring laird. However, when her uncle announces her betrothal to Ian, Maggie’s twentieth-century sensibilities are outraged. She hardly even knows the man. But a refusal of his affections could ignite a blood feud.

Maggie’s worlds are colliding. Though she’s found the family she always wanted, the sixteenth century is a dangerous place. Betrayal, treachery, and a tragic murder have her questioning whether she should remain or try to make her way back to her own time.

To make matters worse, tensions escalate when she stumbles across Bonnie Will Foster, the dashing young man in her father’s portrait collection, only to learn he is a dreaded Englishman. But could he be the hero she’s always dreamed him to be? Or will his need for revenge against Ian shatter more than her heart?

Maggie is a modern day girl, from her time but her da, Robert, is from the sixteeth century, I hear you "whaaaaaaat?" Her "uncle" Eddie met her dad when he time travelled twenty five years ago and brought him to our time. Now they have they chance to go back to the sixteenth, Maggie thinks it is a joke, time travel isn't real. The four, Robert, Eddie, Maggie and her bestie Dylan, travel back to Robert's time, clan and we enter a very authentic time/trials and auld rivalry between Scottish and English.

I don't overly love historical fiction (although as I get older I am finding I am liking it or maybe just choosing ones more relevant to my tastes) but this historical romance with a slash of time travel. The lingo, the issues of that time, betrothals, promises made by tribes, wars, the Border Reivers and at the end of the book a glossary of the terms used and what they mean.

Maggie is a plucky character, she is obviously used to the freedoms women of our time have so having to go back to such a different way of life was really interesting. Imagine hearing centuries old, falling in love with characters and then finding yourself actually living in that time, facing/meeting/arguing with them. I thought that was really cleverly done by the author and enjoyed the interactions with Maggie and the "enemies". As of that time period there is a lot of brutality, murder, women being used/hurt by men, promised into marriage for the sakes of their clans rather than love.

Such a different way of life, I loved how head strong Maggie was at times and other times I wanted to shake her, look what is right infront of you. Engaging, shocking, emotive, family, love, lies, relationships, so so many themes covered. Don't be put off by the time travel if it isn't something you would normally read - it really only comes into it for the transport of that time period really. I thought this was really different to a lot of the books I have read (of which there are many!) and I really enjoyed it. 4/5 for me this time, I would absolutely read this author again, this is her debut and I think possibly book one in a series, I would love to read more about these characters!

Out to buy NOW, treebook and ebook, click HERE from AMAZON UK.

View all my reviews
Posted by So many books, so little time at 12:44