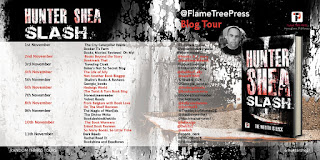 Today is my turn on the blog tour for Slash by Hunter Shea, perfect for a October read for sure! 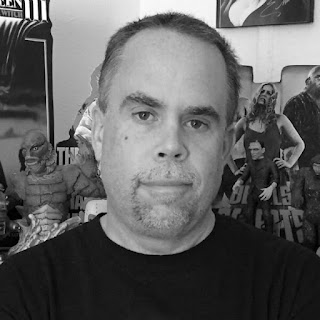 Hunter Shea is the product of a misspent childhood watching scary movies, reading forbidden books and wishing Bigfoot would walk past his house. He doesn’t just write about the paranormal – he actively seeks out the things that scare the hell out of people and experiences them for himself. He’s the author of over25 books, including The Jersey Devil (Pinnacle)and We Are Always Watching (Sinister Grin). Hunter’s novels can even be found on displayat the International Cryptozoology Museum.

The Montauk Monster was named one of the best reads of the summer by Publishers Weekly. He was selected to be part of the launch of Samhain Publishing’s new horror line in 2011 alongside legendary author Ramsey Campbell. He’s an avid pod caster and can be heard and seen on Monster Men and Final Guys every week. Living with his crazy and supportive family and two cats, he’s happy to be close enough to New York City to see the skyline without having to pay New York rent. You can follow his travails at www.huntershea.com. 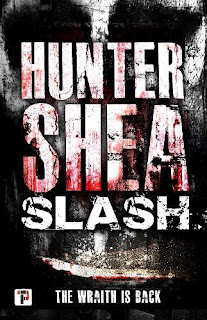 Five years after final girl Ashley King survived the infamous Resort Massacre, she’s found hanging in her basement by her fiancé, Todd Matthews. She left behind clues as to what really happened that night, clues that may reveal the identity of the killer the press has called The Wraith. With the help of his friends, Todd goes back to the crumbling Hayden Resort,a death-tinged ruin in the Catskills Mountains. What they find is a haunted history that’s been lying in wait for a fresh set of victims.

Slash is out to buy NOW and a perfect read for October.

For my stop I have my review, thanks to Anne from Random Things Tours for having me on the tour, I really do need to check out this guys back catalog!

Slash by Hunter Shea
My rating: 4 of 5 stars

Five years after Ashley King survived the infamous Resort Massacre, she’s found hanging in her basement by her fiancé, Todd Matthews. She left behind clues as to what really happened that night, clues that may reveal the identity of the killer the press has called The Wraith.

With the help of his friends, Todd goes back to the crumbling Hayden Resort, a death-tinged ruin in the Catskills Mountains. What they find is a haunted history that’s been lying in wait for a fresh set of victims. The Wraith is back, and he’s nothing what they expected.

Everything is fine in Todd's life, his fiance Ashley hasn't had the easiest time since escaping the claws of a maniac five years ago, the sole survivor. When Todd comes home to find Ashley has killed herself his world is turned upside down. Ashley leaves some hints to what happened five years back and Todd heads back to the abandoned resort to get some answers. What really happened that night, why did they never find the killer and why after five years was Ashley never free from it.

Oh guys! I LOVE an abandoned building and this one is a resort, a resort where five years ago a massacre took place with only Ashley surviving. Now Todd is heading back to the scene of the crime and we are going with him. The killer was never caught but that doesn't mean he has gone for good and Todd may just get exactly what he is looking for!

The killings are brutal, gruesome, sadistic, horrific and you can start to appreciate why Ashley could never sleep or get over it as details are teased out across the story. A build up of eerieness especially once we hit the resort and I LOVED the fact we have inclusive of "crime fans" or should I say fanatics, folks who became obsessed with what happened there and Ashley. It gave a more modern feel to this type of story, we have lots of murder, spooky, eerie type stories but they don't always include real life things ie podcasts, folk obsessed with serial killers, groupies` or unsolved murders. I think this is the second book I have read by this author and I really do need to check out his other stuff. If you like creepy, dark, tense and can cope with some shocking style murders, brutal in their cruelty then this is absolutely for you, 4.5/5 for me this time!