Today is mine and the final stop in the blog tour for A Fatal Secret by Faith Martin, please check out the other stops as we all offer different content/reviews. 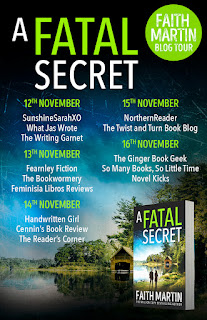 A Fatal Secret by Faith Martin
My rating: 4 of 5 stars

A family day out at Briar’s Hall ends in tragedy when a young boy goes missing – and his body is found at the bottom of a disused well in the orchard.

It looks like a simple case of an eleven-year-old exploring where he shouldn’t: a tragic accident. But Coroner Clement Ryder and Probationary WPC Trudy Loveday aren’t convinced. If Eddie had been climbing and fallen, why were there no cuts or dirt on his hands? Why would a boy terrified of heights be around a well at all?

Clement and Trudy are determined to get to the truth, but the more they dig into Briar’s Hall and the mysterious de Lacey family who live there, the murkier things become.

Could it be that poor Eddie’s death was murder? There are rumours of blackmail in the village, and Clement and Trudy have a horrible feeling that Eddie stumbled on a secret that someone was willing to kill for…

We open with a nice day and someone pondering over the fact they need to kill, there is no other option, how is that for a wee opening! A boy is reported missing and the search is on, the police aren't overly concerned but sure enough they find the lad and it isn't good news. Coroner Clement Ryder and Probationary WPC Trudy Loveday are asked to look into it, on behalf of the family whose grounds it happened on. Not everyone likes people poking around in their business and of course when investigating one matter others tend to arise and someone has much to hide, enough to kill a child over!

So this is book 4 in the series, I haven't read anything by this author and can honestly say I don't feel at a disadvantage starting here. There is reference to things gone past in the previous book(s) and I think haven't my interest piqued I will absolutely be checking out the previous books. Means I will also get to know the characters better.

A chunk of the story is obviously the "investigation" into what happened to the wee boy, who was around, anyone who knew him. However we also have a huge focus on WPC Trudy, her personal life, her family and how important the job is to her. I do enjoy when a book has depth to the characters and a bit of meat in the story, not just the police procedural parts. Ryder and Loveday seem to have a tight friendship which is unusual for both the time, opposite sexes and job differences but it works. I look forward to going back to the beginning of this series and seeing how their friendship comes about. I like how it highlights how unusual Trudy's choice is to focus on a career, despite being good/successful at it. It reminds us of just how apt that was for that time and I do like books that capture a different time period and how things are so very different now! 4/5 for me this time, it may be my first dance with this author but it won't be my last, it also kept me guessing, I had no idea who the baddie was!