Man At The Door by Desmond P Ryan Blog Tour

Today is my turn on the blog tour, please check out the other stops as we all offer different content. For my stop I have my review, enjoy! 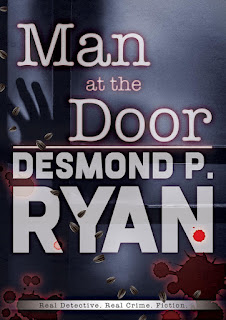 Blurb Man At The Door, the third in Desmond P. Ryan’s Mike O’Shea Crime Fiction Series, Detective Mike O’Shea solves a homicide, juggles an increasingly complex personal life, and continues to hunt for the cop-killer who has remained at large for the past thirteen years.

It all begins at 6:10 a.m. on a Friday morning when Glen Brebeuf calls demanding answers. He had reported his former lover, Elizabeth MacDonald, missing the previous day and Detective Mike O’Shea finds himself cleaning up the mess some rookie had made of the initial call.

Within hours, Mike takes over the investigation and is on the doorstep of the missing elderly woman’s home, determining that Elizabeth MacDonald—Sibby Mac to her friends—is not missing.

Sibby Mac has been murdered.

Along with Detective Ron Roberts and Detective Sergeant Amanda Black, Mike kicks the investigation into high gear. Very quickly, the ex-lover and a high-profile political figure become prime suspects, but, without a body, would there be enough evidence to charge either of them?

A day spent sifting through rancid garbage at one of the city dumps comes up empty for Mike and Ron, but a foul-smelling steamer trunk reported in another jurisdiction provides the eureka moment they need to proceed.

Meanwhile, Mike is doing double-duty, still investigating what he believes to be a link between the accused he has up in court now and his old partner’s killer.

And then there is his mother. Sensing that her son needs her, Mary-Margaret O’Shea has moved into Mike’s home—and his personal and professional life—pending further notice.

As the pieces of the Sibby Mac investigation start to fall into place, Mike follows up on a hunch and decides to take a detour on his way to work one morning. Using every trick in the book, he ends up saving a life, nearly ending another, and almost getting himself killed in the process.

Whether as a stand-alone or as your next step in the Mike O’Shea Crime Fiction Series, Man At The Door will keep you reading far too late into the night following Detective Mike O’Shea through the twists and turns of a homicide investigation. Once you’re done, take a breath and get reading for Blind Spot, coming out in early 2020! 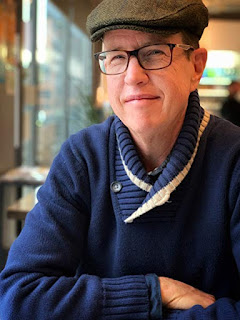 For almost thirty years, Desmond P. Ryan began every day of his working life with either a victim waiting in a hospital emergency room, or a call to a street corner or a blood-soaked room where someone had been left for dead. Murder, assaults on a level that defied humanity, sexual violations intended to demean, shame, and haunt the individuals who were no more than objects to the offenders: all in a day’s work.

It was exhilarating, exhausting, and often heartbreaking.

As a Detective with the Toronto Police Service, Desmond P. Ryan wrote thousands of reports detailing the people, places, and events that led up to the moment he came along. He investigated the crimes and wrote synopses for guilty pleas detailing the circumstances that brought the accused individuals before the Courts. He also wrote a number of files to have individuals deemed either Not Criminally Responsible due to mental incapacity, or Dangerous Offenders to be held in custody indefinitely.

Now, as a retired investigator with three decades of research opportunities under his belt, Desmond P. Ryan writes crime fiction.

The Man at the Door by Desmond P. Ryan
My rating: 4 of 5 stars

It has been a long road for Detective Mike O'Shea who is still recovering from a beating. He is on half duty when a call comes in from an elderly man. He says that his best friend, Elizabeth MacDonald is missing and he presumes she is dead.

Mike is skeptical but agrees to look into the case. When he enters the home, there is no one home and everything looks OK but it isn't. Very small dots of blood are found.

The neighbor who reported the woman missing says he goes to have lunch with her every week but this time he met a man at the door who said he was there to water her plants since she was away. That was always Glen's job and he immediately knew something was wrong.

Mike uncovers a lot of clues in his search. Many of the clues he finds have nothing to do with the crime, it has to do with him and how he will live his life now.

This is the second book I have read by this author featuring Detective Mike O'Shea, I think I read book one and maybe missed the book inbetween. Anyways a good many years has passed since I left Mike and a lot has transpired. He is back to work after a horrific beating and still suffering from the side effects. Technically on light duties he investigates a "missing person" an older lady called "Sibby" Elizabeth MacDonald but the reported, her friend Glen, believes she is dead. Mike starts digging and soon finds himself in the midst of a proper investigation.

So we have a lot more of the personal side in this book, recovering from long lasting injuries, his wife has left him, he just wants to do his job and now his mother, Margaret, has come to stay to look after him. Not going to lie, his mum Margaret who isn't a main character absolutely steals the show. I LOVED the parts she was in, she is an absolute hoot, she cracks me up and I laughed out loud more than a few times at some of the lines she comes away with.

Glen seems a bit of a dodgy character and something just a bit not right feeling with him, Mike has that impression right off. Like, dislike or loathe all of the characters are well carved and we learn a bit more about Mike, I think I need to get the book I haven't read to fill some of my timeline gaps between the two stories. I tweeted when I was reading and the author says Mike's mum WILL be getting her own wee cozy type serious, I am delighted, she is bloody fabulous often much to Mikes's embaressment. A fun, well paced read with skullduggery, investigation, family, cops personal lives and a bit of well timed humour but the scene stealing mother. I do hope she does get her own series and look forward to whatever lies ahead for these characters, 4/5 for me this time.