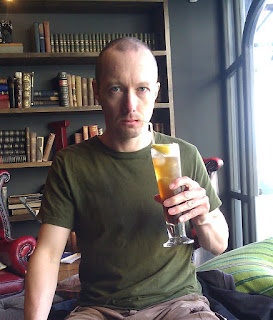 Welcome to So Many Books, So Little Time Karl. Thanks for taking time out for a bit of a grilling with me. FYI readers, there are some swear words ahead! 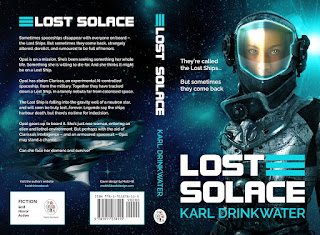 So "Lost Solace", for anyone who hasn’t read it or heard of it, tell us what is it about?

If I was being flippant, I’d say it is the first of a trilogy about a kick-arse pair of women taking on every-fucking-threat in the universe, including the military-industrial complex, and still finding time for noodles and sisterhood. I don’t want to list their main goal, because it’s one of the revelations at the end of Lost Solace. If I was being serious, I’d say it’s a sci-fi book with a heart that gives me the chance to ask questions. What is strength and humanity? Can a machine feel things like a human? How does a woman make her way in a man’s world? And how far will someone go to keep a promise?


You normally write horror, what made you change over to sci fi genre?

To be honest, horror is what I’m best known for, but it’s only one of the genres I write in. For example, my Manchester 2000 books are purely about finding love and happiness, and how our pasts and our obsessions sometimes get in the way of that; one of my current works-in-progress is a literary and contemporary short-story collection with a big focus on love and ethics. My primary interest is telling a story; the genre and style evolve out of that. My books contain different combinations of elements that fingerprint me, but not all are present in every book: examples include family, horror, suspense, love, strength, humanity, action, and reality breaking down.


Opal is a long overdue kickass strong female character, tell me about her?

She’s flawed. She’s not all-powerful. She has a depth of emotion that she dare not reveal easily. She’s righteously angry. She’s quick-thinking. She hurts. All of that means she’s human. There’s no guarantee that she’ll survive what she faces, but we want her to, because she’s noble when she can be. We root for her. She’s a Greek warrior hero, a female mix of Achilles and Odysseus. A mortal Athena (Athene). She can do what we only wish we could do. But with a hero’s achievements there can be a hero’s suffering.


Is she based on anyone you know?

Strangely, no. Many of my female characters are based on women I’ve known and admired. A reader wouldn’t know it, and the inspiring women wouldn’t necessarily recognise themselves in the characters, but I could easily say who they were. Opal is different. She grew as I wrote her. She redefined herself in the flow of words.


I loved the AI (artificial intelligence) and the relationship between the two, what made you go for an AI?

In my story notes the AI was sexless and emotionless. A pure representation of efficiency, directed towards the purpose of killing by the (originally-male) protagonist. In fact, the AI was in the form of a companion robot. But as I wrote dialogue, things would pop into my head. Weird things; clever things; humorous things, but possibly overlaying either innocence or malice. That was irresistible to me as a writer. So I let the dialogue flow and the AI began to define herself. In my original notes I hadn’t even decided if the AI was going to be good or bad. That revelation just happened.


When I started reading this, I kept thinking Event Horizon type movie with a cross of Alien, particularly the AI. Was that intentional?

Yes, they were definite influences. Not so much events, but ideas – creepy abandoned ships in space; people surviving on ingenuity when technology fails; malevolent dangers that are difficult to comprehend because they are so alien to us. Works that I respect leave me with a feeling; it’s a feeling I then try to recreate in my own worlds, so other readers can experience it. I think at one point I made a list of works that had in some way influenced me, and maybe an element of which had crept into Lost Solace. I probably had about a hundred things on the list. It’s similar to what I once did with Turner.


Lost Solace left a lot of unanswered questions, for me anyway, was that intentional and will fans get closure?

Yes to closure. A book that opens a series can be difficult. You don’t want to bind it in the darkness of exposition. Discovering Opal’s motivation is a reward. The other questions are left unanswered because, at this point, Opal doesn’t have the answers, and we generally see through her eyes. But by the end of book three – if she survives – she’ll have more answers than she ever wanted, and knowledge does not always make you happy. The reader will find out the full deal on the Lost Ships and all the other elements of the story, and the outcome may not be what you expect.


What are you working on just now?

A lot of my time is spent on writing-related activity at the moment: finding the perfect narrator for the Lost Solace audiobook, running a big promo (that got Lost Solace to #3 in Amazon’s UK sci-fi top 100!), submissions for a writing residency and prestigious prizes, and some editorial work for other authors. I’m also revamping one of my early books, 2000 Tunes, and hoping to get draft two of a new short-story collection finished. I’m also drafting out my storyboard for the sequels to Lost Solace so that when I come to write them (hopefully in the nearish future!) the first drafts will be clean and well-structured.


What kind of research do you do for this kind of book? Keeping in mind Sci Fi fans are hardcore and can be uber critical, does that make it easier or harder for you?

It didn’t feel much different from any other work I’ve written. I always do preliminary research while storyboarding, but then write the first draft and just fill in the gaps with my imagination, so as not to break the flow. Then there is a lot more research and fact-checking during the numerous rewrites. With Turner I stayed on a remote island for a week; with 2000 Tunes I researched the history of Manchester music, and the city centre layout in the year 2000; whereas with Lost Solace I was researching repair gels, ship layouts, and biological sensing systems. Luckily my degrees mean I have some background in astronomy, geology, natural science, information science and computing, so that helped shape my story. I think there was only one correction that needed making to the real science aspect. 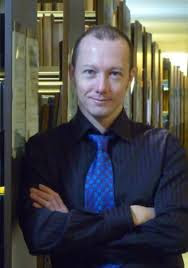 Where can fans connect with you?

My website and blog can be found at http://karldrinkwater.uk and it links to everything else. I am active on my Facebook page https://www.facebook.com/karlzdrinkwater/ and Twitter http://twitter.com/karldrinkwater and regularly interact with everyone there. Superfans also sign up to my quirky newsletter at http://bit.ly/newsletterkd


Anything else you would like to add I may have forgotten?

I love hearing from people. Only today I had a long email from someone who had just read Lost Solace, and it was fascinating because it was their first book set in space. It gave me a good glimpse into how that alters the reader’s expectations. Luckily they loved the book. I’m surprised you didn’t bring cats and dogs into the conversation. Thanks for having me!

And if a fabulous Q&A wasn't enough for spoiling you guys, I am giving away my copy of "Lost Solace" - to enter just fill in the Rafflecopter as usual. The more entries you complete the more times your name is entered into the draw.


a Rafflecopter giveaway
Posted by So many books, so little time at 00:01