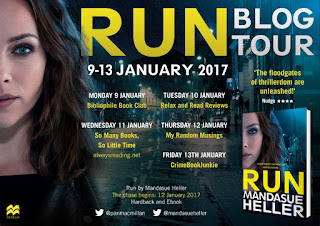 Today is my turn on the blog tour for RUN by the fabulous Mandasue Heller, I was very lucky to receive an arc from Netgalley, click HERE to read my review. Mandasue has very kindly agreed to do a Q&A so without further delay, welcome to So Many Books, So Little Time and thank you so much for taking the time out to answer some questions. 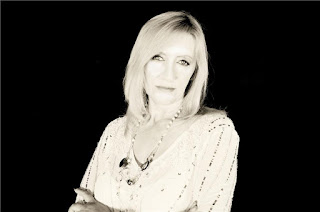 It has been quite a time for you since your last book release, how are you doing?

I had to skip a year to look after my mum so it’s been difficult, but I’m slowly getting back on my feet.


Run is quite a book, mixed with friendships, relationships, lies and secrets, how hard was it writing it?

It was really hard, because my head was elsewhere for so long. I completely lost sight of it halfway through and didn’t know if it was good or bad, so my lovely man, Win, read the first half and told me it was fine and he didn’t see what I was worrying about. He also made a suggestion about one of the characters that I hadn’t thought of, which really moved it forward.


Who is your favourite character in the book and why?

I really like the friendship between Leanne and Chrissie, and I have a big soft spot for Ben. As for favourite, I’m not sure. Possibly Chrissie, because she’s sharp and takes no shit.


I felt Run snared you from the opening chapter as you didn’t know who was in such peril, was this intentional or just fabulous writing?

It was intentional, although I originally had a different scene as the prologue. My editor suggested changing it when I’d finished, because it gave too much away - he was right.

I used to be an avid reader, but I read very little now as I tend to mentally rewrite everything, which takes away the enjoyment.


When is the next book and do you have a story line in mind?

I’m writing the next book already, and it should be out next year. I’ve also made a start on the one I’ll be working on after that.


I have to ask for our Scottish fans, do you think you will ever make it up here for a launch?

I have done events in Scotland in the past, and imagine I will again in the future. Beautiful place.


What about a duo author interview night with Kimberley Chambers?

We done several events together in the past, and will definitely hook up again at some point.


What is next for Mandasue?

When my latest book is finished, I’ll start writing and recording songs for the album of ballads Win has been composing for me while I’ve been working. After that, it’ll be time to crack on with the next book :)


Thanks again for stopping by Mandasue, good luck for the release date. You can buy Run from all good retailers from tomorrow 12/01/2017 available in paperback and ebook. Follow Mandasue on Twitter @MandasueHeller or visit her Facebook page