Talk of The Toun by Helen MacKinven Blog Tour

Having to post this a wee bit early due to the fact I am working tomorrow, my slot for the blog, and won't be home til after 8pm. So here goes, also, I have my ARC copy, now signed, to give away as part of the tour, I will list this once I get home from work. That will be the 6th of November after 8pm UK time so make sure you stop by to enter. 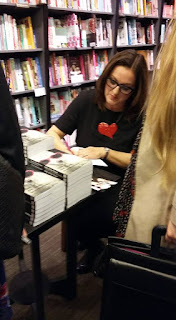 Tell me a bit about you?

I’m 47 years old and so I was 17 in 1985, just like the main characters Angela and Lorraine. My childhood was spent in Bonnybridge, famous for UFO sightings and I went to high school in Falkirk so the setting for Talk of the Toun was easy to recreate from my own personal experiences. After watching one too many episodes of Escape to the Country, three years ago I moved to a three hundred year old cottage in a small rural village in North Lanarkshire to live with my husband. I have two grown-up sons but I have filled my empty nest with eleven chickens, two dogs and two pygmy goats.

For the last ten years I’ve enjoyed writing flash fiction, short stories and I’ve completed three novels. My debut novel, Talk of the Toun, is the first of my novels to be published. In 2011, I took a career break to go to Stirling University to do an MLitt in Creative Writing but I’m now back on the road with my day job which involves travelling all over Scotland to deliver maths training for teachers so I have to fit my writing into days off and school holidays. Why did you choose Scotland and that time period for your book?

I wanted to write the type of book I love to read and my favourite writers, such as Janice Galloway, Anne Donovan and Jackie Kay, have set their books in Scotland and given a ‘voice’ to working class characters and this inspired my own writing. The advice often given is, “write what you know” so being a teenager in the 80s in central Scotland meant I could write a credible story.

There are a fair few characters, how did Senga come about, is she based on anyone you know?

The story is entirely fictional – nothing that dramatic happened to me growing up! But I did have a very close relationship with my gran and spent a lot of time with her in the same way Angela gravitates to her gran for support and guidance. My own gran died nine years ago and I still miss her dearly, she was funny without realising it, kind-hearted, a bit vain like Senga and had a white poodle too. But she wasn’t a pet psychic or an extrovert like Senga although she did give me plenty of inspiration and ideas for humorous scenarios. The book’s dedication is, “In memory of my gran, Ella, who taught me the meaning of unconditional love” and I know she’d be proud of me achieving my dream of being a published novelist.

Not really as she’s mine too! As my own relationship with my gran was full of love and laughs it meant I could create a character very loosely based on fact so I think that’s why the character connects with readers. I hoped folk would warm to her and I’m chuffed she’s your favourite too. I would love to see a book about Senga and I am sure I am not alone, is it something you would consider? I had never thought of doing another book with any of the characters but who knows, maybe if I get more interest in Senga I’ll consider writing more adventures for her and Bimbo.

You have captured the mid-80s amazingly, I found myself transported back to many memories I had long forgot. Was this something you meant to do?

Yes, I wanted the setting and time period to feel real so I needed to incorporate cultural references such as fashion, TV programmes, pop songs, food, household décor and gadgets from the era that would trigger the sense of the 80s. I’m blessed (or sometimes it feels more like a curse!)with a really good memory so lots of the details came back to me but the internet was invaluable to check my facts as there’s nothing worse than reading a book and seeing errors littering the page.

What research did you do to capture such an accurate portrayal of the people and times you write about?

There are a lot of websites with themes such as, ‘I love the 80s’ so I spent time reminding myself of things like clothes and makeup that were popular. I also signed up to the Pinterest website which is a great source of inspiration with thousands of boards full of images from the 80s. I set up my own boards for the book, one with images specific to Talk of the Toun and one for general 80s images if readers are interested to see the visuals related to the story. https://uk.pinterest.com/helenmackinven/

What is next for Helen MacKinven?

I’ve been busy with the pre-publication build-up for Talk of the Toun and my day job so I haven’t managed to do much writing on my next project. But I’ve made notes after a bit of research and written a few thousand words on a new novel. This book (if I finish it!) is set in Airdrie after the referendum result but with a local historical event related to the Leningrad Siege weaved into the narrative. Where can readers find you, ie twitter, facebook, website? I blog regularly at helenmackinven.co.uk and can be found on Facebook and on Twitter @HelenMacKinven

You can find my review for Talk Of The Toun here http://www.alwaysreading.net/2015/10/talk-of-toun-by-helen-mackinven_12.html Talk of the toun is now available to buy, kindle £4.99 or a paperback copy at £9.99 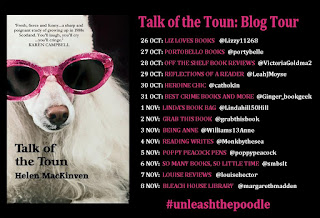 I also managed to get to the book launch for this last night, in case you missed it you can see the post and pictures here
Posted by So many books, so little time at 22:48