Thanks Mark for taking the time to answer some questions for me. If you haven't already read Coconut Badger it is this months giveaway and you can enter via this link http://www.alwaysreading.net/2014/01/januarys-pre-loved-giveaway-is-coconut.html 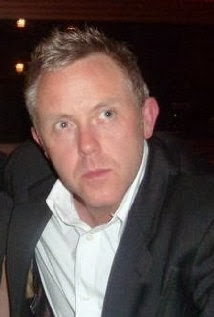 How did you get into writing? I’ve always been a consumer of stories, TV and Film mostly but also novels. I left school at 16 with no qualifications and it wasn’t until I was in my thirties that the bug started to get a grip of me. I had my own IT business in London then and was starting to spend more and more time on what would eventually become Coconut Badger. I had serious overheads and It was financially very reckless but I just couldn’t stop myself.

I knew in my heart I wouldn’t be able to do both and would have to choose. It was a very hard decision made easier by being single with no children so I went for it and sold my IT business. That was four years ago and I’m still here. It has been very tough, I’ve skipped a few meals and periodically I can’t afford to put the heating on but I honestly wouldn’t change a thing.

What inspired Coconut Badger? I grew up in a fairly rough neighbourhood in Glasgow called Pollok. I seemed to be the only person I knew who didn’t like fighting and discovered at a young age that my life might be made easier if I found a way to deal with it. Hard to explain to people who don’t come from this background but a coward can often find themselves with low status in the hierarchy. Where I grew up, people who could ‘handle themselves’ had higher status it was that simple.

On a serious note our prisons and graveyards are full of people from socially excluded backgrounds who were conditioned to handle confrontation in a certain way. I believe people growing up in more affluent areas are conditioned differently. There is less stigma associated with not liking confrontation/violence, if anything that is likely to be encouraged. My hope is that there are multiple themes in Coconut Badger but for me this is the central one. The sense of shame Tam feels at his inability to handle confrontation and any subsequent violence with the, shall we say enthusiasm of his peers.

How long did it take you to get the idea for and write Coconut Badger? I had completed a third of the novel part time over a two year period I reckon, so it was fairly slow going. Obviously the pace picked up when I went full time and the remainder probably took me around nine months.

Are any of your characters or stories based upon real people? Obviously Tam is inspired by me not liking confrontation and violence growing up but he and all the other characters and stories are fictional. The ‘Monkford’ is loosely based on an area inside greater Pollok known as ‘South Nitshill’. Pat is an amalgamation of every psychopath I’ve ever met in my life. The ‘Lord Darnley Tree’ figures prominently, that’s an actual tree on Nitshill Road.

What authors do you read? Some of my favourites are Iain McEwan and George Orwell, Alisdair Gray, James Kelman, Archie Hind, Irvine Welsh, too many to list. I’m currently reading female protagonists written by men to help me with my second novel.

Do you plan to write any more stories with the Coconut Badger characters? I spent a couple of months in Hollywood recently and a production company want to film an adaptation in Glasgow in 2014. The fat lady isn’t singing but she’s in her changing room warming up so fingers crossed the deal finalises.

When is the next book due out? I released the first part of my second novel as an ebook on Kindle last month ‘Finn McCool Rises’ the Celtic legend arrives in Scotland to come to the rescue of a female journalist who has uncovered a politically sensitive story that puts her life in danger.

How hard, or easy, is it to get a book out there? Probably the hardest thing I’ve done in my life. I couldn’t find a publisher for Coconut Badger so decided to self publish. Just because you can’t find a traditional publisher doesn’t mean your story isn’t good enough. If you walk away from it.. Let it die on your hard drive.. What does that say about how you feel about your own work? No way I was walking away so I decided to self publish.

One thing I knew for sure was that it must be comparible in every way to a mainstream house. You sit my book next to any of them and you wouldn’t know the difference. I invested a lot of time and resources to recruit a top editor, artist, typesetter, printer etc to make sure that the physical book is comparible in quality.

As for the contents, well obviously I’m biased, but I believe the reader contact I’ve had via my website and twitter, along with decent reviews, more than demonstrates that the work can hold its own. My biggest challenge has been marketing and distribution without the backing of a publisher. I rely heavily on social media and word of mouth.

On the plus side I have a lot of freedom. I don’t think a publisher would have let me do something so different with my second novel.

Which author would you most like your writing to be compared to, if you had to pick one? I found myself thinking of Brookmyre whilst reading Coconut Badger. I’m happy for people to compare me to whoever they like but I don’t personally want to be compared to anyone. I know it’s a fairly standard answer to that question but I do genuinely just want to be myself with my own voice.

What’s next for Mark MacNicol? Current focus is completing the second part of the Finn McCool Rises novel. I just finished co-directing a short comedy film I wrote. Hopefully the LA deal closes and Coconut Badger feature shoots in Glasgow 2014. Also co-producing a George Gunn play at Edinburgh Fringe 2014. That lot should keep me busy.


You can follow Mark MacNicol on twitter and via his website, listed below, for updates. www.markmacnicol.com @markmacnicol
Posted by So many books, so little time at 17:15