Today is my stop on the blog tour for The Christie Affair by author Nina De Gramont, for my stop I have my review, non spoiler as always. 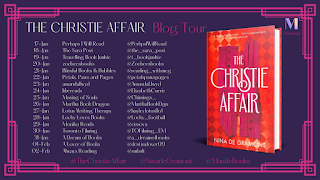 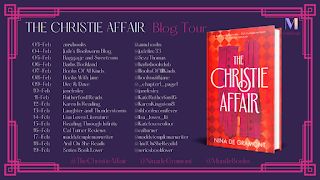 The Christie Affair by Nina de Gramont
My rating: 4 of 5 stars

Time taken to read - in and out over 5 days

Nina de Gramont's The Christie Affair is a beguiling novel of star-crossed lovers, heartbreak, revenge, and murder—and a brilliant re-imagination of one of the most talked-about unsolved mysteries of the twentieth century.

Every story has its secrets.
Every mystery has its motives.

“A long time ago, in another country, I nearly killed a woman. It’s a particular feeling, the urge to murder. It takes over your body so completely, it’s like a divine force, grabbing hold of your will, your limbs, your psyche. There’s a joy to it. In retrospect, it’s frightening, but I daresay in the moment it feels sweet. The way justice feels sweet.”

The greatest mystery wasn’t Agatha Christie’s disappearance in those eleven infamous days, it’s what she discovered.

London, 1925: In a world of townhomes and tennis matches, socialites and shooting parties, Miss Nan O’Dea became Archie Christie’s mistress, luring him away from his devoted and well-known wife, Agatha Christie.

The question is, why? Why destroy another woman’s marriage, why hatch a plot years in the making, and why murder? How was Nan O’Dea so intricately tied to those eleven mysterious days that Agatha Christie went missing?

Agatha Christie is a name pretty much everyone is familiar with. I have never read her books (I have one on my tbrm) but I do know she was an author and she went missing for eleven days. What happened in those days has been speculated on although Christie never (that I am aware of) divulged what happened in that time. In The Christie Affair the author creates a version of what happened, a look at the mistress and all told from the mistresses' POV.

Nancy Neele is not a name I knew as I said I don't really know much about Agatha Christie nor what prompted or speculation about why she bolted. The book is heavily centred on Nancy, she is telling the story and her story interlinks with Agatha's in a surprising turn of events.

We learn about Nancy's background, growing up and what ends up bringing her to her current position. I felt the book actually focused much more on Nancy's character, there is of course Agatha and Archie in the book but much more of Nancy than I expected. She is of course the centre factor for the break up of Agatha's marriage. Her own story is emotive and I found myself flipping between being sorry for her and annoyed at some of her choices.

There is no denying De Gramont has done a lot of research and reading in preparation for the re-imaging of what went down between these characters. Filling in gaps around events we know did happen. It is certainly interesting and I found myself putting it down to read up on the characters and events to see how much was true/fact. This was my first time reading this author, I would read her again. I intend to dig out my Christie book and maybe read up about the author and what has been written about her days gone missing, 4/5 for me this time. The book is out to buy/read now.