Gone Girl by Gillian Flynn
My rating: 4 of 5 stars

Who are you?
What have we done to each other?

These are the questions Nick Dunne finds himself asking on the morning of his fifth wedding anniversary, when his wife Amy suddenly disappears. The police suspect Nick. Amy's friends reveal that she was afraid of him, that she kept secrets from him. He swears it isn't true. A police examination of his computer shows strange searches. He says they weren't made by him. And then there are the persistent calls on his mobile phone.

So what did happen to Nick's beautiful wife?

The tale opens with Nick Dunne, husband of Amy Elliott, on the day Amy goes missing. We have a short chapter covering Nicks morning, the day of their fifth wedding anniversary, before he hears Amy has disappeared. The next chapter is a diary entry, from some years previous, with Amy when she meets Nick for the first time. This is how the story is laid out, chapters going between Nick and Amy, past and present as we get a build up and view of their relationship until both parties are caught up to present day. Amy has gone missing, the house shows signs of a struggle and Nick quickly comes under scrutiny from the police and eventually the press. Amy's diary entries gives the reader a different look at the relationship, from the early days and then jumping through months and years until caught up to the present. Nick is behaving inappropriately and weird for a mans whose wife has disappeared, and there seems to be more to this story than meets the eye.

Despite the tale jumping through time periods and two characters, the chapters are well signposted and the reader can follow what is happening very quickly. Amy seems like a likable character at the beginning of the story however as you get into the meat of the tale, neither Nick, nor Amy are particularly easy to like characters. The pace of the story is set well and the reader is drawn in very quickly, I read this story in one day as I was dying to find out what happened to Amy and was Nick involved?

It is a fabulous thriller, I didn't see the twists and turns coming and think the diary entries from Amy are very well done, although this isn't a format I like normally in stories. This was my first time reading this author and I would read her again. Your interest is captured quickly, your guessing who done it, what happened and keep going for one more chapter in case you find out. The chapter length makes this easy to do so as they are fairly short which also helps you to race through. My only gripe would be considering the pace and depth throughout, the ending was a little weak in comparison however it is still a great psychological thriller worth checking out. 4/5 for me and I will be tracking down more by this author.

Also this book saw a late night as I wanted to know how the book ended, kitty struggled to stay up 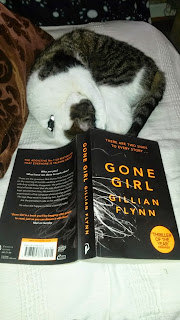